CrestClean’s vision to double in size 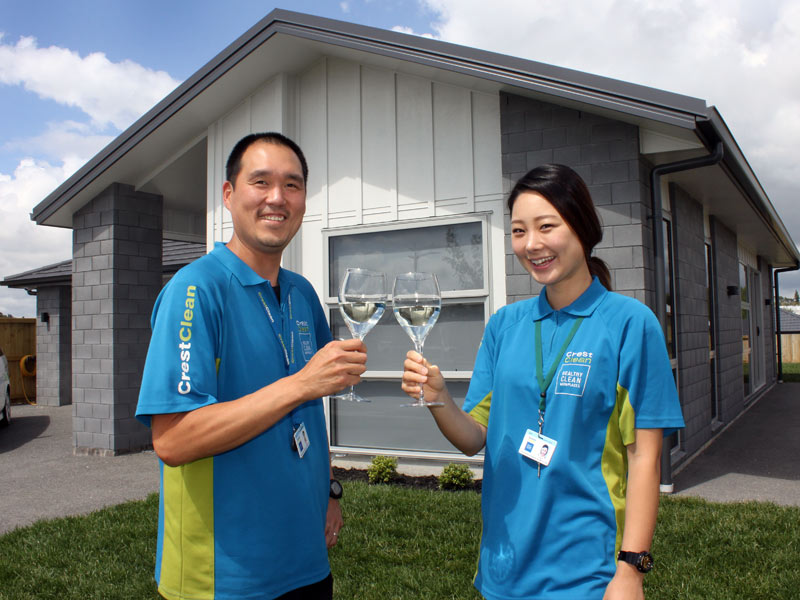 Tauranga franchisees Tony and Aina Kang have had the best Christmas present ever –they’re just moved into their brand new home! The couple didn’t think they would be able to afford a home of their own so soon. But it’s thanks to Crest and the success of their business that they’ve been able to realise their dream, says Tony. The spacious 3 bedroom property is located in the city’s fast-growing Lakes subdivision. “This really is the best Christmas present ever for us, we are so happy,” said Tony.

CrestClean’s phenomenal growth is set to accelerate with Managing Director Grant McLauchlan announcing the company is well on track to double in size.

The company’s 20th anniversary coincides with major investment in IT upgrades and new management systems as CrestClean strengthens its position as the dominant performer in New Zealand’s commercial cleaning industry.

CrestClean has seen a year-on-year growth in excess of an average of 20 per cent for the past decade. And the company has been enjoying a recent lift in the service sector, with an increase in demand for commercial cleaning services.

“A lot of projects are now coming to fruition, which is positioning us beautifully for 2017,” said Grant.

A television advertising campaign this year has raised the company’s national profile and CrestClean has grown to become a widely recognised and trusted name throughout New Zealand, said Grant.

“Next year is going to be a fantastic year for us,” he said.

“We see the company is doing extremely well and our strategy is to grow the business and double its size within the next five to seven years. We think this is achievable.

“Crest has an objective of turning the whole industry into a career path as opposed to what has traditionally been a high-turnover industry of people who have had little or no training.

“Crest has transformed the image of the industry and also the business model of it, enabling people to see the cleaning industry as a lifetime career of opportunities.”

After his annual tour of the regions and presentations to franchisees throughout the country, Grant said he was thrilled to see that more franchisees than ever have been able to buy their own home.

A franchisee satisfaction survey had shown that franchisees feel a strong sense of commitment to CrestClean.

“We are delighted that 58 per cent of our franchisees indicated they own a home, with 14 per cent telling us they own more than one home.

“As a company one of our principal key performance indicators is home ownership. It’s one of the underlying statistics of the success of our business.

“We could go on about how good the business is but if it doesn’t generate income that can substantiate home ownership it’s actually not that successful.

“One of our key objectives is to see people transition from no home to being able to purchase a home for their family. It provides a substantial amount of stability for our franchisees and us.”

Crest’s Move to the Regions Programme had been a resounding success, said Grant.

“We’ve seen a lot more uptakes this past year. I’ve talked to franchisees who have made new lives for themselves and their families outside of our major cities.

“I’ve seen the joy on the faces of franchisees who are enjoying the lifestyle that they now have.”

But the success of the programme had not been without a few challenges, he said.

“We are finding it difficult to recruit people fast enough to the regions. We have surplus work everywhere and we really need to recruit new franchisees to keep up.

“We’d like to recruit them locally so they are part of the community but we also want to offer opportunities to people living in the big cities to relocate.”

Grant said reaching the 20-year mark was not only an opportunity to reflect on the company’s success but also a time to look ahead at more exciting times to come for Crest’s franchisees.

“We’re building a culture where we’re giving responsibility to people and saying run with it, go with it.”