Doing the hard yards pays off for Prasun 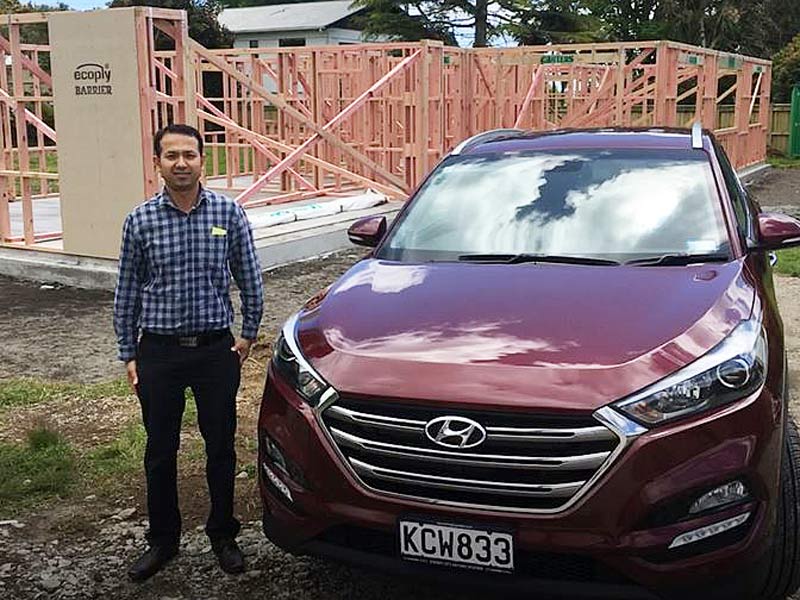 Prasun Acharya has a brand new car and is having a home built for his family.

Right now it’s just a timber frame on a concrete base several months from completion – but in his mind’s eye Prasun Acharya can already picture the stunning vista he’ll wake up to each day.

For Prasun and his wife Diksha are thrilled by their change in fortune since they moved to Taranaki in 2015 when Crest established a regional presence there.

And being in a position to afford their own home was something “completely beyond our imagination”, he said.

In April the couple and their young daughter will move out of the modest rental property that has been home for two years and into the brand new three-bedroom house, which will have fabulous views of the area’s iconic Mount Taranaki.

And Prasun has recently being able to upgrade his ageing Toyota Corolla to a brand new Hyundai Tucson, which is more suitable for travelling around the region and ideal for his family’s growing needs.

The couple have worked tirelessly since they arrived in the area. They moved from Napier, where they had a Crest franchise, and Prasun took on the role of Taranaki Master Franchisee.

But it was not all plain sailing as on arrival they faced an uphill battle in a region where few people had heard of CrestClean.

“When we arrived so many people asked the same question: “are you guys local?’’.

But through sheer determination, perseverance and long hours spent on their own cleaning franchise, the couple’s business took off as more franchisees joined Crest and the company’s name became widely recognised.

“Slowly we managed to build the business and establish a Crest presence in Taranaki, especially in the New Plymouth area.

“Now people know who we are and part of that success is down to Crest’s television ads,” said Prasun. “Our customers know the high standard we set in the cleaning industry.”

Crest’s Managing Director Grant McLauchlan paid tribute to the hard work by Prasun and his wife in putting the area on the map.

And Grant said it showed what could be achieved personally by franchisees with a vision.

“I recently conducted the Taranaki regional team meeting and it was great to have the opportunity to drive around in Prasun’s brand new car.

“We went and visited his new house that is under construction. Well done Prasun and Diksha you are a real credit to CrestClean.”

Taranaki is an area being promoted by CrestClean’s Move to the Regions Programme.

The programme provides people who would like to own their own business with an opportunity to move outside of Auckland and Wellington.

Taranaki offers a great outdoor lifestyle where homes are “affordable” compared with many metropolitan areas of New Zealand.

Families can exchange the fast-paced lifestyle and expensive house prices for a comfortable one with cheaper living and more opportunities, and CrestClean gets much-needed personnel in the smaller regions to service its ever-increasing customer base.