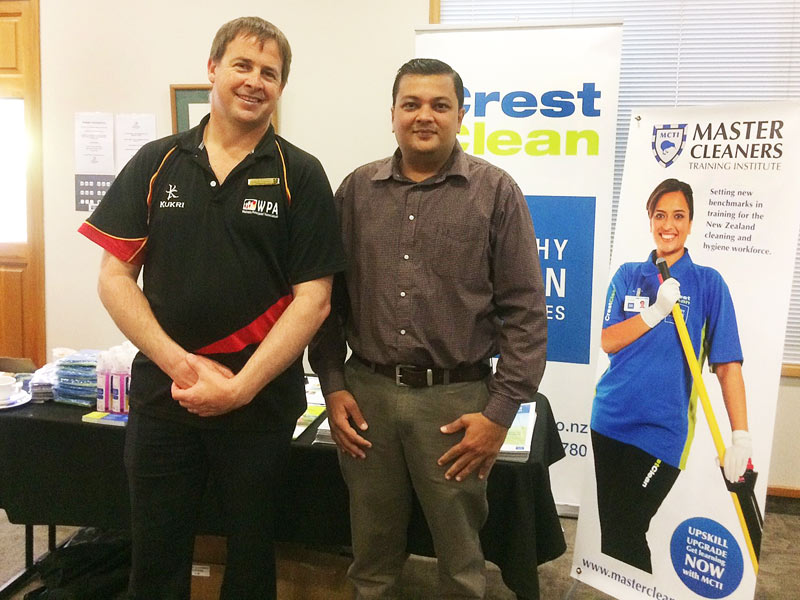 Hamish Fenemor, who is on the organising committee of the Waikato Principals Association, with Nivitesh Kumar, Crest’s Waikato Regional Manager.

Crest’s Waikato Regional Manager says the experience of being at a principals’ conference reinforced the benefits of attending such events.

“It’s a great opportunity to get to know the principals and it also helps to build trust. Being at the conference brings a personal touch and we can let people know what CrestClean can offer them.”

Having a stand at the event also enabled Crest personnel to highlight other services that are available to schools, such as caretaking, carpet cleaning and Pure Water Window Cleaning.

“Schools really like them and we had a lot of teachers at the conference asking for packs of posters and replacements as they are getting a lot of use.”

Nivitesh said it had been a great year for Crest in the education sector. Kaipaki School in Hamilton had signed up following the retirement of the school’s cleaner. And the conference had provided an opportunity to provide cleaning quotes for other schools.

CrestClean takes pride in supporting the hard work the principals do in maintaining high standards in their schools and Crest sponsors a number of principals’ conferences throughout New Zealand each year.