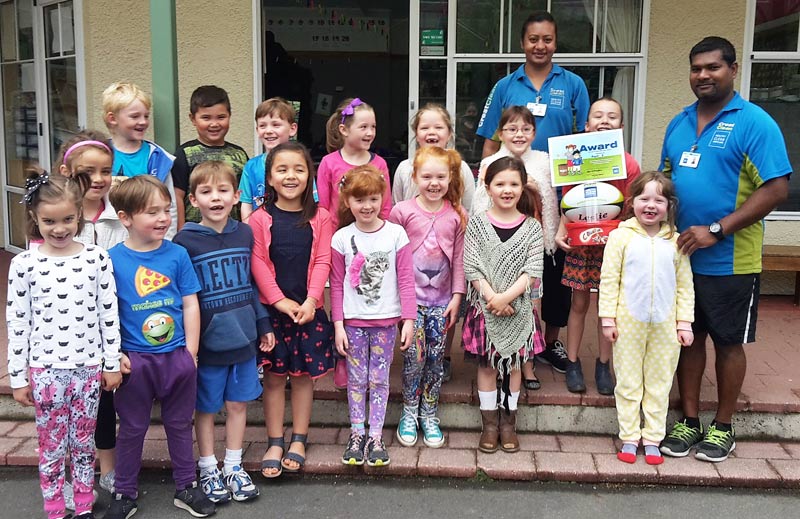 Dan and Madhu Pariachi hand out their Cleanest Classroom Award to pupils at St Bridgids School in Dunedin. CrestClean’s Cleanest Classroom competitions are held at many of the schools cleaned by Crest franchisees. The classroom that is kept the cleanest in the school is awarded a certificate and a prize at the end of the term.

Meet two high-flying franchisees who’ve shown how determination and hard work can reap rich rewards in more ways than one.

Dan and Madhu Pariachi’s CrestClean business is booming and they’ve now been able to purchase a place of their own – something that just a couple of years ago would have seemed unimaginable.

It could be said their success is a modern day rags-to-riches story, and their journey will be an inspiration to others considering becoming a small business owner.

It all began in Auckland in 2008 when they arrived from Fiji in search of a better life. Dan, a cabinet maker, found work while Madhu studied healthcare.

But living in Auckland proved costly and a constant drain on the young couple’s finances – even more so when Madhu became pregnant with her first child.

She initially gave up work to become a stay-at-home mum. But their finances became stretched to the limit and the debts escalated.

In search of a solution, Dan widened his search and landed a well-paid job in Dunedin for an auto glass company and the family moved south.

“Things were very tight financially and when Dan got a job offer in Dunedin we didn’t have to think twice, we moved straight away,” said Madhu.

Madhu began to search for a job that would help bring in some extra income and ease the couple’s money worries. “I couldn’t find anything that suited family life as it’s hard when you are juggling two full-on young boys,” she recalls.

She thought about going into business and began looking at the commercial cleaning industry as an option where flexible working hours could fit in with her duties as a mum.

CrestClean soon became the obvious choice. She had spoken to family and friends, who told her of Crest’s reputation as an industry leader and a trusted brand in the commercial cleaning sector.

“With Crest all the accounts and everything is done for you. That was a big thing and it was very attractive to us. We also knew Crest has a very good name.

“We had heard a lot about Crest and it also made sense for us to buy a franchise plus the head office was in Dunedin where we were living.”

She said she was amazed how quickly it all came together after she bought her cleaning business.
The training and support she received from Crest gave her the confidence to start work again after being a stay-at-home mum.

“It was a very good experience and I don’t really have words to describe it,” she said.

Dan joined her in the business in February 2014 after he was made redundant. At that point they decided to ramp up the business and they took on extra work.

“We had to get another income so it made sense to increase our turnover. It gave us more security.”

Dan says they worked “24/7” and put in long hours to build up their business –it proved to be a smart move that would soon pay off.

“We managed to save a lot to pay off our debts and we’ve been able to buy a house,” he said.

For Madhu, homeownership was the realisation of a long-held dream, she said.

“Having a young family we were always hoping that one day we could buy a house. It was something that had seemed impossible.”

They were in a position to begin start house-hunting just 18 months after starting their Crest business.

“It was an amazing feeling when we were able to buy our own place,” said Madhu.

They couldn’t be happier in their 1900s villa in Dunedin. Sons Tyler, 3, and Ryan, 7, love their new home, she said.
“There’s a massive back yard, big bedrooms, a big hallway and plenty of space to run around for my boys,” she added.

“They just love it. We used to live in a flat. They never had a backyard.”

Dan says it’s thanks to their Crest business that they have a home of their own.

“If me and my wife had been working for someone else we would never have been able to afford a house.”

Dan and Madhu have grown their business and now have six staff working for them. Their turnover has increased tenfold since they purchased the franchise in 2013.

They have worked tirelessly on all aspects of the business. Madhu said it was particularly important to put their customers’ needs first.

“We have good relationships with them and know we are doing a good job. We always pop in to see our customers regularly.”

Dan is also one of Crest’s Hard Floor Care Trainers and he says he enjoys the role and working with the Master Cleaners Training Institute.

“Their work ethic and work quality is very good. They take real pride in what they do and go the extra mile for their customers.

“They’ve both realised that there’s more to Crest Commercial Cleaning than just cleaning. And they’ve realised there’s the ability to specialise in different areas such as Pure Water Window Cleaning and going after the higher paid jobs.”

He said the couple had been smart by investing in cleaning machinery that could also be hired out to other franchisees, bringing additional income to the business.

“It just goes to prove that hard work and determination can get you what you want in life. It’s what a Crest business is about.

“Earnings are not capped, and if you work harder you can make more money. The sky’s the limit really.”