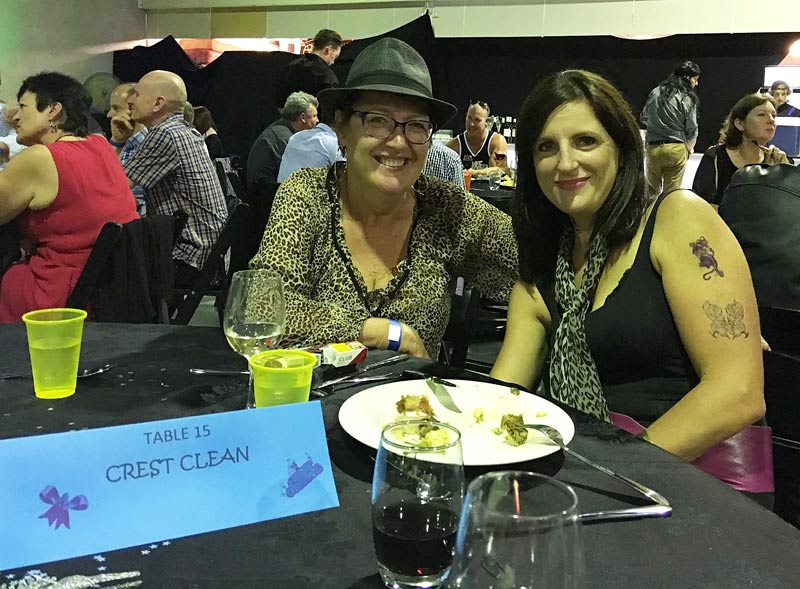 Caroline Wedding and Megan Miles looked just the part for the Westie-themed party.

CrestClean’s Auckland West Regional Manager has her favourite Ugg boots to thank for helping her get in a cheeky promotional plug for the company in front of a packed business audience.

Caroline was accompanied to the party by Megan Miles, who works for Crest’s Auckland teams looking after customer services. The pair looked fantastic, with Megan baring her arms to show off some pretty impressive temporary tattoos, set off with a black top and leopard print scarf in true Westie fashion.

But it was Caroline’s eye-catching boots that was a standout, and they won her a prize during the party, which was fittingly held at South Pacific Pictures studio where popular TV show Outrageous Fortunes is made.

And as Caroline stepped up to receive a jigsaw puzzle prize she couldn’t resist getting in a quick tongue-in-cheek promotion for CrestClean.

“I said that we clean for the stars and I said it’s not clean until you’ve had a CrestClean team in!”

The theme of the night was “dress as your inner Westie”. The party was attended by several hundred people. Caroline said the event was a great opportunity to have fun and also a chance to network with other business people in West Auckland.

“It’s was a really great night. We had a huge amount of fun. There were some hot rods and at one point they were revved up and did the Westie thing.”