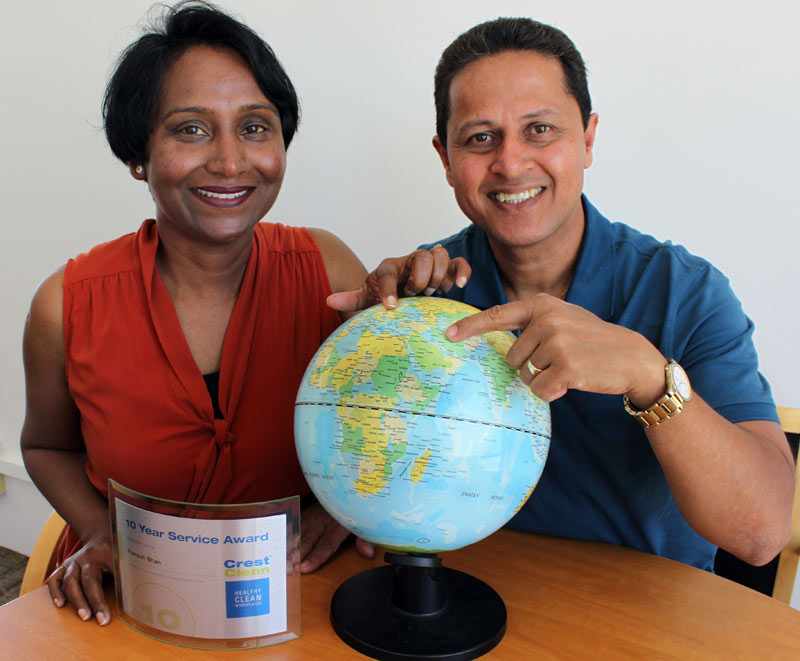 Rakesh Bhan and his wife Mohini are planning a trip to the Holy Land after receiving a $2000 travel voucher from Crest.

Rakesh Bhan credits his strong Christian faith and some divine intervention for paving the way when he fled Fiji with his wife and young daughter as civil unrest gripped the Pacific island nation.

The family came to New Zealand 2001 and now 16 years on life has never been better, says Rakesh as he celebrates 10 years with CrestClean.

The 52-year-old recalls how things fell into place after he arrived in New Zealand in search of a better life for his family. His wife Mohini landed a teaching job at a prestigious Christian school in Tauranga and Rakesh also found employment in the city, later deciding to go it alone and buy a Crest franchise.

In Fiji, the family lived in Suva where Rakesh worked in the tourism industry and had his own business. He made a living making and selling wooden products from his shop.

“I used to do wood carving and I made various wooden items, anything from picture frames to wall clocks,” he said.

But life rapidly changed for the family when a civilian coup happened in Fiji. The uprising meant uncertain times, said Rakesh.

“It was not safe living in Fiji at the time, especially for Indians. It was time to leave.”

In search of a new beginning, the family quickly looked at where they could go.

“We had the option to come to New Zealand because of my wife’s qualification as a maths teacher.”

In Suva the couple were closely involved in their local church where Mohini was a Sunday school teacher. They told the minister their plans to leave Fiji and after receiving prayers and his blessing there was an unexpected turn of events, says Rakesh.

“We got our New Zealand visa within seven days of applying, it was pretty amazing really as these things do not usually happen quickly.

“I believe it was God’s calling,” added Rakesh.

And more things fell into place when they quickly found a buyer for their home.

“Just after the coup no one wanted to buy a house but we only had one person interested and he was the only caller and the only buyer.”

After arriving in New Zealand the family stayed with Rakesh’s sister in Auckland.

Things looked up when Mohini landed an interview at Bethlehem College in Tauranga for a maths teacher – but the competition for the job was fierce with 50 applicants going for the role.

Rakesh says it was an answer to prayer when Mohini finally heard she had been successful.

“We really felt it was God’s calling there was no two ways about it. We strongly believe in that.”

Before buying his Crest franchise Rakesh worked at Gilmours wholesale food company in Tauranga. And it was through the personal connections he had made at Gilmours that Rakesh was able to secure more customers for his cleaning business.

Rakesh says a real bonus of being a franchisee is his valued customers and the satisfaction he gains through his work and the relationship with fellow business owners. He says he feels valued and customers respect him as a fellow businessman.

“There are people out there who might think we are just cleaners. But my customers treat me as one of them, it’s the biggest bonus,” he added.

He still loves the cleaning work and has 16 customers in Tauranga.

“I have completed my 10 years at Crest because of my customers. If you have got wonderful customers you can continue your journey. If they are nice you can be with them for 10 or 20 years.”

Rakesh and Mohini are closely involved with Tauranga Methodist Church where Rakesh helps to keep a new kitchen area spic and span. He also volunteers his time to give a helping hand to some elderly members of the church.

“Many are in their 80s and 90s and are grateful of some help with the cleaning as many of them just cannot afford to pay to have it done.”

The couple are planning a well-earned break overseas. And the $2000 travel voucher from Crest to mark Rakesh’s long service will go towards a trip to the Holy Land.