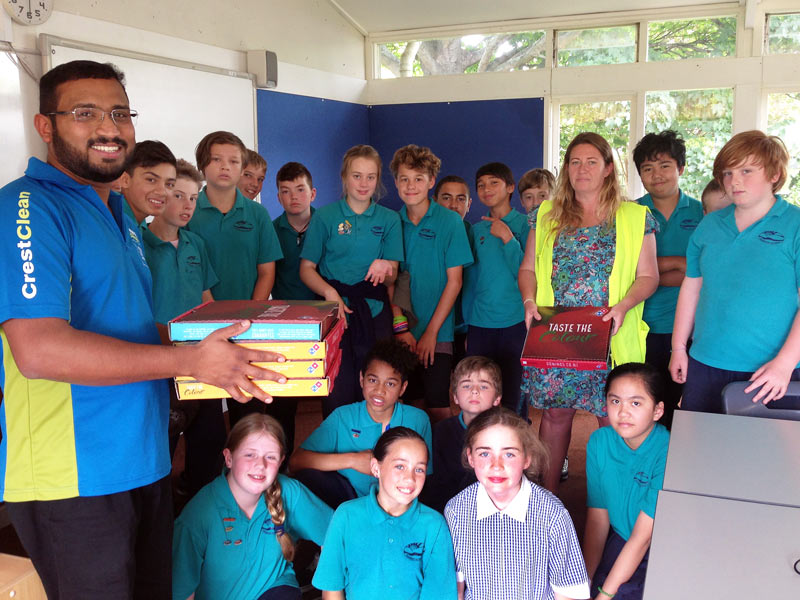 Titus Samuel hands out pizza to Room 7 pupils at Bamford School in Christchurch.

Kids cleaned up their act in a spectacular fashion after a unique Crest competition to foster pride was introduced throughout the school.

CrestClean franchisees Titus Samuel and his wife Priyanka were at their wits’ end over the state the classrooms were being left in at Bamford School in Christchurch. Cleaning up messy floors meant their workload doubled.

Floors were frequently littered with food scraps, rubbish was strewn around classrooms and toilet areas were left in a messy state.

But the Crest business owners say they cannot believe the change in attitude shown by the youngsters – and it’s all down to the introduction of Crest’s Cleanest Classroom competition.

The classroom that is kept the cleanest in the school is awarded a certificate and a prize at the end of the term. The competition not only fosters a sense of pride in their surroundings, it also gives kids the incentive work together to win a special treat.

The popular competition is run at many of the schools cleaned by Crest franchisees throughout New Zealand.

Samuel said the change was remarkable. “Before we started the competition the kids didn’t bother to use waste bins and a lot of rubbish was strewn around the floor.

“We tried many times to improve things. But it was always the same and everything was left in a bad condition. The kids didn’t want to keep the place clean.

“Fruit skins and food would be everywhere. There are only seven classroom but we were spending a lot of time trying to keep up. It was a really big job for us.”

“It has really worked. At the end of the day the kids now pick up the rubbish off the floors,” said a delighted Titus.

And he’s seen a meteoric shift in attitude. “The kids come up and say, ‘we are trying to keep our classroom tidy, please chose us’. We saw a really big difference last term.”

Priyanka said they could now concentrate all their time on keeping the school spic and span.

“The competition made a lot of difference. Winning that prize made the kids feel good.

“It installs a sense of pride. We’ll keep the competition going. It’s really changed the way we work at the school.”

Priyanka said Yasa was a great manager and they had nothing but praise for the way he keeps customers happy and helps franchisees manage their workload.

“We want to say a big thank you from the bottom of our heart.”