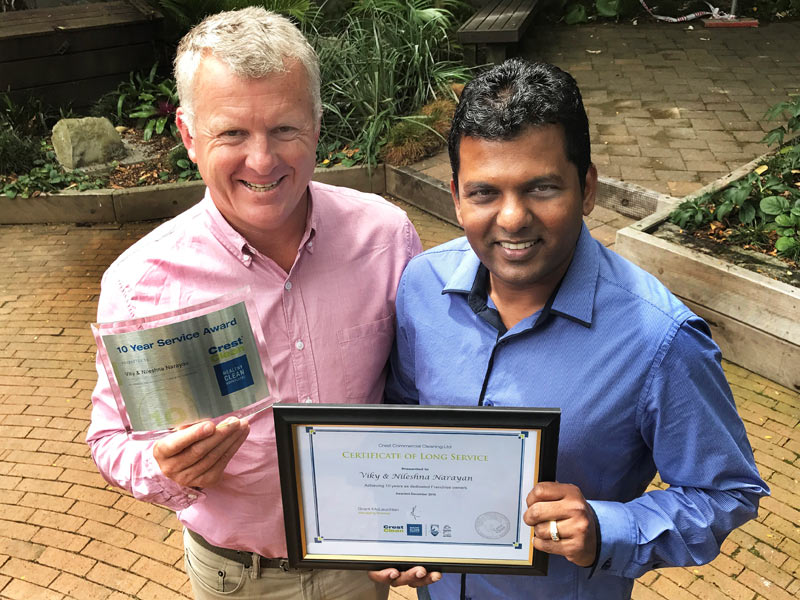 His colleagues have teasingly dubbed him CrestClean’s “Mr School”.

But the title is certainly apt and sits very well with hard-working Master Franchisee Viky Narayan. Of all Crest’s Regional Managers throughout New Zealand, Viky has the highest number of schools on his books.

And he makes no secret of his passion to do the best he can for the schools in his region. It means he seldom misses an opportunity to attend community events staged by many of the Auckland schools that are Crest customers.

And with nearly 80 school contracts to oversee in South and East Auckland, he’s an extremely busy boss. Vicky manages 92 cleaning teams with a combined workforce of almost 190 personnel.

After a decade with CrestClean, Viky has just received a prestigious 10-year Long Service Award.

Viky’s success story is testament to what can be achieved through hard work and determination from someone who is prepared to start at ground level.

It was in 2005 that Viky and his wife Nileshna decided to buy a Crest franchise. Originally from Fiji, Viky was a successful accountant and arrived in New Zealand in 2003. His career switch had come about when he decided to look for a job that wasn’t totally office based.

“I wanted a more physical job. I was really fed up of sitting at a desk for eight to nine hours a day,” he said.

Viky set his sights high and soon seized an opportunity to take on the role of Auckland South Regional Manager, overseeing a large CrestClean customer base. But Viky and Nileshna had further plans to expand their successful commercial operation. In 2013, they added the East Auckland region to their business.

Vicky believes hands-on experience gained from his first role at Crest has helped to build trust and has fostered close working relationships with his franchisees.

“It has certainly helped me relate to the franchisees. They know I have high standards and I believe I can be a role model to them.”

Viky has a soft spot for his school customers. He makes a point of getting to know all the principals and frequently attends school events such as galas.

“I try to support them as much as possible and I also help with sponsorship where I can. It feels good when you can help out and give something back to the community.”

Viky and Nileshna have shared the limelight by landing several prestigious business awards.

The couple won the Business Excellence in Marketing Award at the 7th annual Indian Newslink Indian Business Awards in 2014.

And the husband and wife team won the 2015/2016 Westpac New Zealand Franchise Awards Master Franchisee of the Year. They were also finalists in the 2015 Westpac Auckland South Business Awards for Excellence in Marketing.

CrestClean Managing Director Grant McLauchlan said Viky is an outstanding Regional Manager and Viky’s success has filtered down to all areas of his life.

“His success has enabled him to achieve a lot in his personal life. In particular, he has a beautiful home that has come from his hard work after 10 years at Crest.

“He’s also achieved many accolades and business awards. He had the confidence to expand his business to Auckland East.”

Grant said Viky is the only Master Franchisee to own two regions, adding: “He has resilience and the confidence to deploy Crest’s well proven system of commercial cleaning across two regions.

“He has great people skills and is very well liked by everyone, both internally and externally. We’d like to congratulate Viky on this great success.”

To mark 10 years with CrestClean Viky and Nileshna received a $2,000 travel voucher. The couple are planning to take a family trip to Fiji.

Viky paid tribute to his wife, who he says works hard behind the scenes on their business.

“She does so much by helping out in the background. She is brilliant and does most of the admin work.”