Kids get a kick out of Crest rugby balls 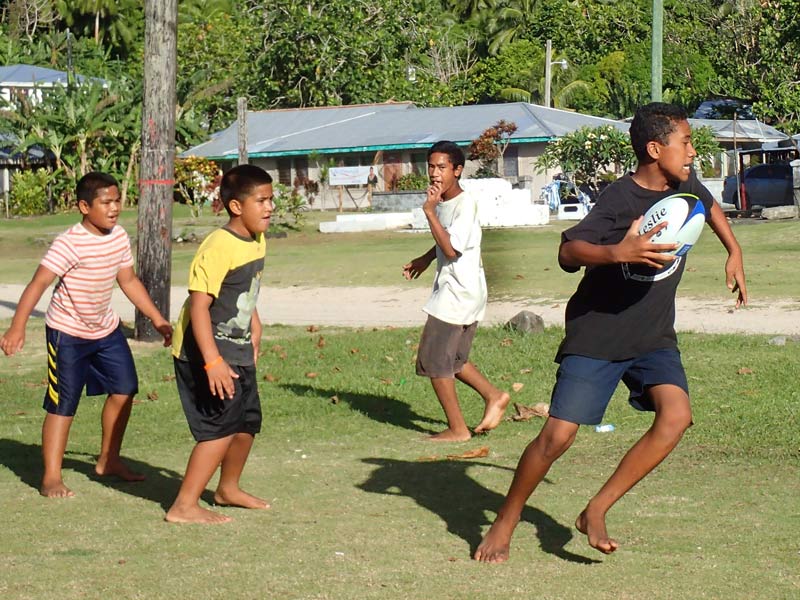 Island kids enjoying the gift of a Leslie Rugby ball.

Leslie Rugby balls have found a great home in a remote village on the island of Tutuila in American Samoa.

They were given to some young boys living in Aoa Village who were friendly to CrestClean’s former Communications Executive Amanda Witherell and her partner, Brian, who are travelling around the South Pacific aboard their 14-m yacht.

Since the couple left New Zealand in 2015, they have sailed to Tonga, Fiji, Tuvalu, Kiribati, the Marshall Islands, Samoa and American Samoa.

“We have met friendly, amazing people at every village we’ve visited,” says Amanda.

“But this was the first time we encountered kids who could speak enough English to ask us all these questions.

“They were so curious and wanted to know everything about us – where we were from, what we eat on the boat, how we shower, if we get scared on the water, our parents’ names, which church we attend, our favourite football team,” says Amanda.

“It was overwhelming, but so interesting. One woman told us it was really exciting for the kids because they’d never before seen a sailboat like this anchored in front of their village.”

The kids took the visitors on a tour of their village, which is home to about 200 Samoans and rarely sees tourists – particularly by boat.

“In other countries, you usually don’t need permission to sail around and visit different villages, or if you do, it’s an easy and established process.

“In American Samoa, it’s quite difficult. First, you must visit the village by land, find the matai and ask if you can anchor your boat in their harbour.

“Then you have to convince the harbourmaster in Pago Pago, who stopped granting permission several years ago because of some bad boaters who polluted the water and were disrespectful to the villagers.

“I didn’t think he was going to let us, but we spent an hour talking with him in his office and I guess he was convinced that we would behave ourselves.”

Amanda and Brian spent time getting to know some of the villagers, eating local foods, and learning about the palolo, a natural phenomenon that only occurs during a certain part of the year and in certain lunar, tidal, and weather conditions, when a type of coral spawns.

The palolo is collected by the villagers and considered a highly prized delicacy.

“There was much speculation that the palolo might happen while we were there and everyone was asking if we’d seen anything as we paddled into shore at night on our paddleboards,” says Amanda.

“It did happen, but on the other side of the island, so we didn’t get to see it.”

That didn’t detract from the experience at all. “Overall, it was just such a warm, friendly village and the kids were so great. We knew we wanted to give them something in return.”

Amanda had some Leslie Rugby balls aboard the boat, donations from CrestClean to share with just the right kids.

“They were a little surprised that the balls were meant for them to keep. A 10-year-old boy named MJ told us it was a very special gift for him. And then he got busy teaching us the rules of their street style of rugby.

“It was so fun to play with them and see how keen they are about sports.” 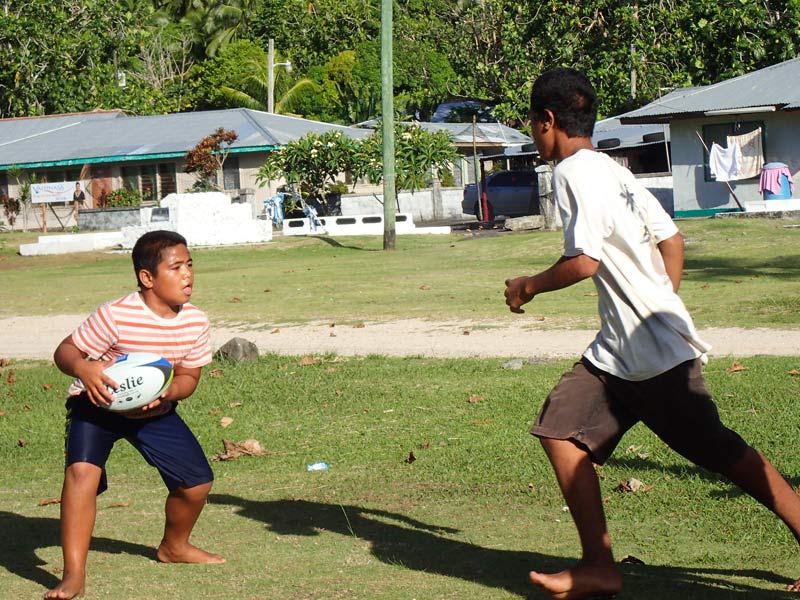 Fun and games thanks to Crest.