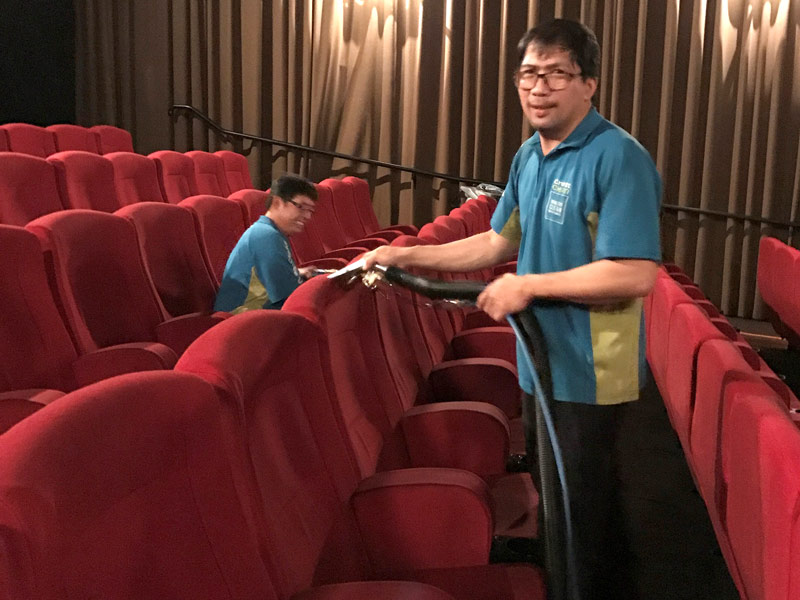 Orlando Cudal and Martin De Guzman get cracking on cleaning the seats.

Crest’s Invercargill team are shining stars after working through the night to meet a customer’s deadline.

It was a case of the show must go on when Crest was asked by bosses at Reading Cinemas to carry out a cleaning blitz at the Invercargill movie complex.

The brief was to clean all the carpets and seats throughout the centre, which has five cinema screens.

Glenn Cockroft, Crest’s Invercargill Regional Manager, said it was a big job and he was impressed how his team of Orlando Cudal and Martin De Guzman rose to the challenge.

Glenn said the cinema’s management stipulated the work would have to be done outside of opening times.

“They approached Crest to see if we could undertake the task which was going to have to be done late at night and in the early hours of the morning.”

Time was not an issue for franchisees Orlando and Martin, added Glenn.

“They both entered the theatres after the last customer had left and carefully cleaned every seat and all of the carpets throughout the theatre during the night.

“This was a big task to take on, but they completed it over two separate nights to ensure everything was cleaned ready for the customers coming in the following day.”

Glenn said Crest has gained a reputation for high-quality cleaning.

“Many of our customers now see Crest as a one stop shop for all of their cleaning needs.

“Not only do we provide commercial cleaning services but we do have specialist teams for areas like windows and carpets.”