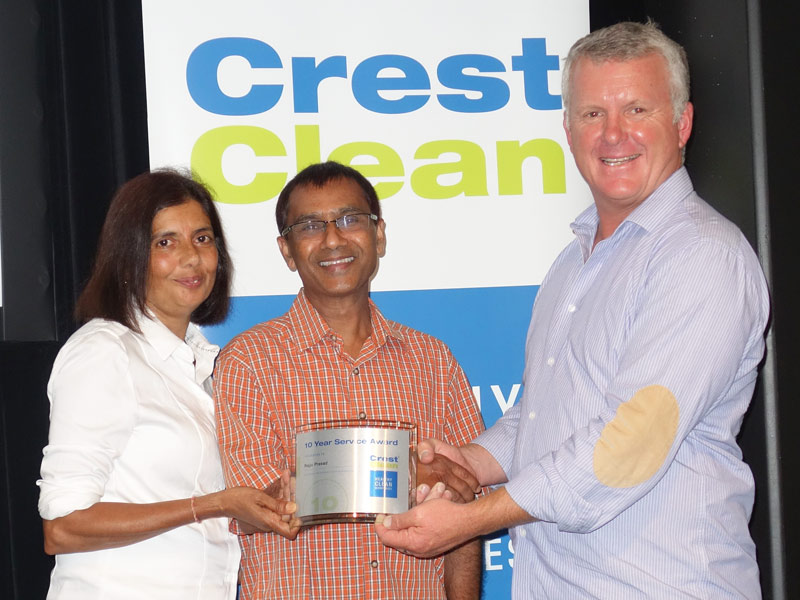 The boss of a large international pharmaceutical company has paid tribute to the dedication of the Crest team that has been working at the South Auckland plant for more than a decade.

CrestClean was reliable and the service provided was of a “very good standard”, he added.

“The fact that crest has been with us so long is quite miraculous. We’ve been though all sorts of ups and downs in that time. It’s unusual to keep a contractor for so long.”

He added: “It’s rare to have the same person doing the same job for so long.”

Husband and wife team Rajju and Manorama Prasad have been carrying out cleaning duties at Argenta for 11 years and say they enjoy the close relationship with staff at the complex, which manufactures animal health products for a worldwide market.

“When he’s passing he will always say ‘hi’ to us. We have a very good relationship there. They regard me as a staff member rather than a contractor and I really enjoy the work and the people in particular are really great,” said Rajju.

Argenta is now a highly innovative and successful international business with locations in the US, Scotland and New Zealand with more than 400 staff globally.

Due to the confidential nature of the company’s work, having trusted and reliable cleaning staff at the Auckland premises was paramount, added Dr Cleverly.

Finding a suitable cleaning company had involved a rigorous selection process – but Crest had been a standout contender over other cleaning firms, he said, and was the obvious choice.
“It was evident these guys had in the past held some sort of client interaction because they were very engaging, very talkative, and it was pretty much that that won us over.”

Dr Cleverly said he’d been so impressed with CrestClean that he decided to engage the company to carry out cleaning work at a separate manufacturing factory run by his wife in Auckland.

“The standard that they operate to has been very, very good. That’s why we decided to take Crest on board at the factory as well, so we’ve been really, really pleased. We are happy all round.”

Earlier in his career Dr Cleverly had been involved with the development of cleaning products for a competitor to the Eco store that had to meet Environmental Choice standards.

“It’s a big deal and its important and a good thing for the environment. It means when Crest is cleaning our plant they are not leaving all sorts of unnecessary and potentially harmful residues lying around, which is a good thing.”

Achieving the green standard was no mean feat for CrestClean, he added. “It’s a very, very strict accreditation, one of the strictest around as it’s actually based in Europe and they are pretty strict.”

Rajju has been with CrestClean for 10 years and has seen his business grow more than fourfold in that time. Originally from Fiji, Rajju is an accountant by profession and has been in New Zealand since 2005. He and Manorama left Fiji following a civilian coup.

He is passionate about his work and has been a Regional Trainer for CrestClean, helping to mentor new franchisees to the industry.

Viky Narayan, CrestClean Regional Director South and East Auckland, said Rajju and Manorama are model franchisees who take great care and pride in the way they run their business.

“They are a very hard working couple and they are very much liked by their customers. They have been servicing their same customers for the past 10 years.”