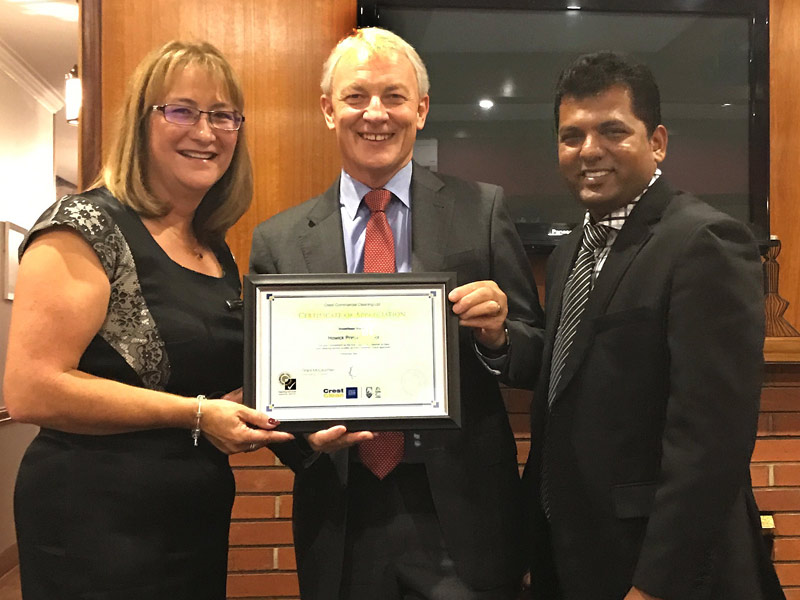 Auckland’s Mayor has played a key role in CrestClean’s tribute to school staff who helped pave the way to the company gaining Environmental Choice accreditation.

An Environmental Choice assessor visited the school to monitor a CrestClean franchisee at work as part of an in-depth process to scrutinise CrestClean’s service and delivery methods throughout the country.

Mr Goff was attending a breakfast meeting of Howick Pakuranga Principals’ Association when he was invited by Viky Narayan, Crest’s Regional Manager South and East Auckland, to make the presentation on behalf of the company.

Viky said Auckland Council’s commitment to sustainable practices fitted in with CrestClean’s long-term vision and news of the Environmental Choice endorsement had been well received by his school customers and principals at the meeting.

Having the council leader make the award was an honour, he said.

“When I gave the certificate to Mr Goff to present he read it out aloud to the whole audience.”

At the meeting Mr Goff spoke about Auckland’s growth and the number of new buildings planned for the city.

It was a theme Viky seized up when he addressed the audience. And he couldn’t resist a light-hearted follow up to Mr Goff’s speech.

“In my opening line I thanked the mayor for his speech and then I said: ‘you have told us about all these plans for houses and new buildings in Auckland so you will definitely need somebody to do the cleaning with the number of buildings you are going to put up!

“It seemed to go down very well as everyone cracked up laughing.

“I also spoke about Crest and how we have been in the commercial cleaning market for 20 years.

“I mentioned the Environmental Choice endorsement and briefly told them what it was all about. Everybody was interested.”

Viky said Ms Callister was delighted with the award from CrestClean.

“She was very happy to receive the certificate. She said they would display it in the school office and said it would go down well with the school’s board of trustees.”

CrestClean has been certified by Environmental Choice New Zealand (ECNZ) against internationally recognised standards and principles.

Products and services that carry the ENCZ label must meet stringent sustainability standards and be shown to have a minimal environmental impact.

CrestClean has more than 4100 customers, including 350 schools.