Show me the money honey! 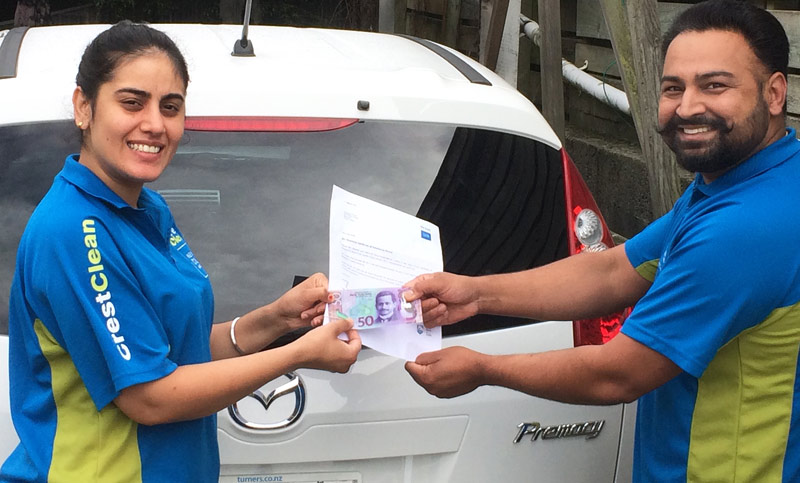 Randeep and Kiran Singh can’t decide who should pocket the cash.

Money is often said to be one of the main reasons why couples squabble.

So when a surprise $50 prize arrived at Randeep and Kiran Singh’s Timaru home it was hardly surprising a light-hearted tussle over who got to keep the cash broke out.

A tug-of-war over the crisp $50 note was finally resolved when the popular franchisees decided to frame the note and accompanying letter from CrestClean’s Managing Director Grant McLauchlan.

The hardworking husband and wife showed they are a polished act by winning the quarterly prize for the most Certificates in Excellence Awards.

Robert Glenie, CrestClean’s South Canterbury Regional Manager, said Randeep phoned him to say he had had a courier turn up with a package that contained a brand new $50 note and a letter of thanks from Grant.

And Rob said what happened next was hilarious.

“After a bit of debating they both decided to frame the letter and $50 and proudly hang it on the wall.”

Rob is singing the praises of Randeep and Kiran, who have been with CrestClean for less than a year.

“They are just a shining light of what you can do with a great attitude and good customer care. Every month Randeep visits all his customers and asks them if they are happy and is there anything that they can do better.”

That dedication to the job as a small business owner pays dividends for the couple, added Rob.

“I receive several emails from customers every month to say thank you for the great service they are receiving from Randeep and Kiran.

“In less than 12 months Randeep has gone from working in a freezing works, and Kiran working part time at Subway, to now running a very successful Crest Franchise. They employ two staff and they have been able to purchase two vehicles and are now looking at buying their first home.”

Randeep said the couple’s lives had undergone a remarkable change since they joined CrestClean.

Originally from the Punjab in India, Randeep came to New Zealand in 2007 as a student. He studied cooking at Timaru Polytechnic and later worked as a chef for five years.

After a spell working in a fish factory and two years at a freezing works, Randeep decided it was time to work for himself.

“Working in the freezing works was pretty hard work. It was very cold and the days were long.”

He was putting in long hours, leaving home at 4.30am, working 12-hour days.
Meanwhile, Kiran was juggling two jobs, working at Subway in the day and nightshifts at McDonald’s.

It meant there was little time for each other, said Randeep.

“We didn’t see each other much and just used to catch up on the phone. That was a deciding factor. We now spend 24/7 together and it’s pretty good. We work together well.”

Since joining CrestClean the couple have tripled the size of their business. Although they work hard the rewards were not just monetary, Randeep said. “You are your own boss. There is no pressure and it is very rewarding.”

And regular contact and good communication with their customers has been a key to success. They have picked up new business through personal recommendation from their current customers.

Randeep and Kiran said they are impressed by the support they receive from CrestClean.

“Rob is a really good manager and is very helpful. He has given us some really good advice and we enjoy looking after our customers.”

Rob said his region was booming, he had great personnel and there was plenty of opportunities for people wanting to move to South Canterbury.

“Every time you meet Kiran and Randeep you can’t help but notice their welcoming smile and warm greetings.

“I am so lucky in South Canterbury to have some of the best people and franchisees.”

CrestClean’s Move to the Regions Programme pays relocation costs to help people move from the country’s main cities to areas where franchisees are needed.