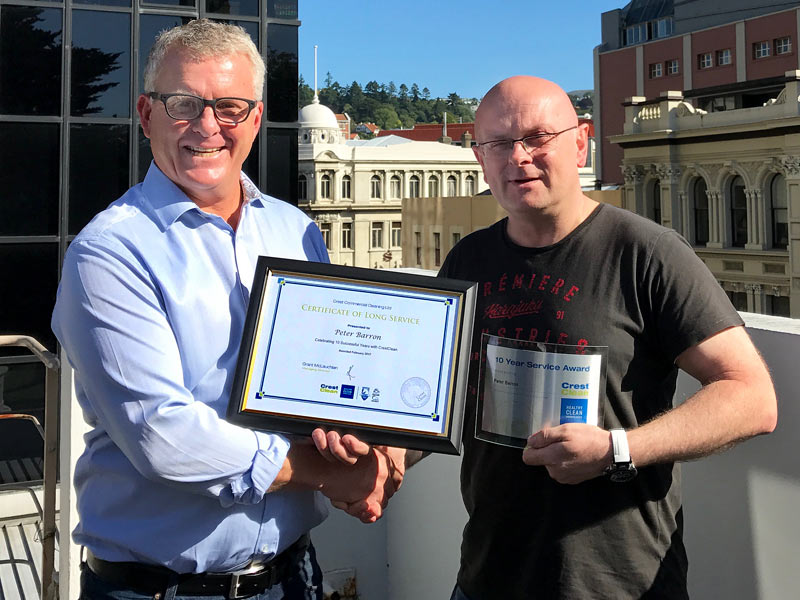 He has targets to hit that are part and parcel of his busy CrestClean role that keeps him fully stretched.

But after work CrestClean’s National Credit Control Manager Peter Barron can be found refocusing his aim on something that requires an equal amount of mental dexterity – plus some muscle power to remain on target.

For Peter has found archery a great way to unwind – and it’s a sport he’s taken in his stride.

The 43-year-old dad, who has just celebrated 10 years with CrestClean, enjoys nothing better than the challenge of improving his skills on the archery ranges.

“It’s about bettering the score you’ve had the previous week,” he said. “It’s quite a technical sport but thankfully it came fairly naturally. It’s nice to improve on the distances and see yourself get better.”

And Peter is pretty pleased with his progress. He can now shoot 50m and he reckons he’s well on target for competition level, which starts at being able to unleash an arrow over a 55m distance.

Peter scored a direct bullseye when he landed his CrestClean job, he says.

He loves the friendly environment at the company, which he says is more like being part of a family. And he seized the opportunity to join CrestClean after initially being employed by a company that specialised in consumer debt recovery.

“The people at Crest were really lovely and the job was challenging, which really attracted me. Crest was also a company that obviously was growing and going somewhere. It seemed an ideal opportunity.”

As National Credit Control Manager Peter is responsible for ensuring customers pay on time and queries are resolved quickly.

He’s seen big changes in the business over the past decade. “The growth has been fantastic over those 10 years. It’s been amazing really.”

A Yorkshireman, Peter is originally from Leeds in Northern England. He visited New Zealand in 2004 and was wowed by what he saw. “I fell in love with the place,” he says.

Dunedin is a great place to live, says Peter, who travelled throughout the country before opting to settle in the city.

It’s a far cry from the lifestyle he had in the UK, where he worked for a large greeting card company.

“Everywhere in Dunedin is within 10 mins. In the UK it was an hour’s drive to work every day, and the traffic was pretty bad and you’d be crawling along the motorway.”

Apart from archery, Peter is kept busy with his two young sons aged five and seven.
A family trip to the UK is on the cards with the $2,000 travel voucher Peter received from CrestClean’s Managing Director Grant McLauchlan to mark his 10 years long service.

Grant paid tribute to Peter’s commitment to the company. “It’s fantastic having someone remain with us for 10 years. We have the right environment and pathways for our people who can see there is a very good career path for them.”

Grant says Peter’s role was a key position that he took in his stride.

“He knows the customers and the pulse of the business. Peter’s role is important as he looks after one of our biggest assets, the accounts receivable.”

“We’ve had lots of good feedback over the years about Peter’s manner and how he conducts himself, internally and externally, undertaking what is traditionally quite a difficult job.”