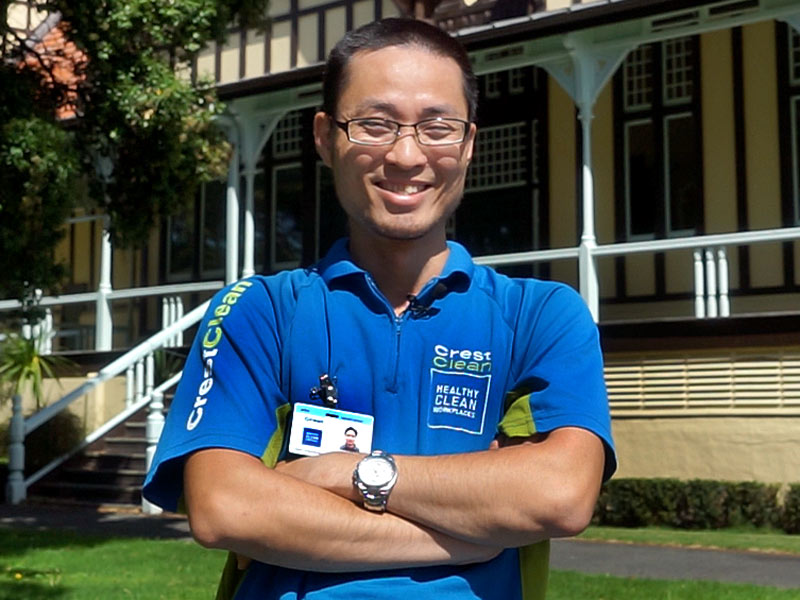 William Lin loves living in Rotorua where he has a large CrestClean franchise.

William Lin loves the flexibility he gets from running his own cleaning business in New Zealand’s North Island tourist capital.

Depending on where you bump into the 37 year old, he could be wearing one of two uniforms.

William runs a very successful CrestClean franchise in Rotorua – but he also works as a part-time tour guide at the city’s popular Rainbow Springs Nature Park.

Fluent in Mandarin and Cantonese, William’s language skills are in high demand at the park, which sees thousands of Chinese visitors each year. It’s a job that he can easily fit in around his cleaning work.

Set among the native trees and beautiful forests of Rotorua, the park offers a fun-packed and educational experience for the whole family. Favourite park residents include, reptiles, kiwi and many other native birds.

William loves the guiding work and says it helps to keep him in touch with his Chinese roots.

It’s a total contrast from his cleaning business, he says. “One job I’m quiet and working on my own and the other job I’m talking all the time! It gives me a good balance.

“They call me to take groups of Chinese tourists. I explain to the visitors about New Zealand’s trees and native animals, like the kiwi. It’s easy work and I can fit it around my CrestClean work.”

William is originally from the Canton region of China and has been in New Zealand for 15 years. He came here to study computing and eventually set up his own business repairing computers and designing websites.

In search of a new business, CrestClean came on his radar by chance.

“One day I was walking past a school and I saw CrestClean was there cleaning and I thought that must be an interesting job,” he says.

“I did some research and decided it would be a good business to buy, so I bought a franchise.”

In two years William has doubled the size of his business. He wife Shuting Tain also helps out and they have recently taken on an extra employee.

William likes living in Rotorua and the laid-back lifestyle of the tourist city. “It’s not crowded or busy and there are quite a lot of Chinese people living here,” he says.

“CrestClean gives you a good lifestyle and you get a stable income.”

The dad-of-two says the success of his CrestClean business has enabled him to invest in the local property market. He has bought two investment properties in Rotorua.

Bill Douglas, CrestClean’s Regional Manager for Rotorua, Whakatane and Taupo, said William was an impressive franchisee. “He is a really nice guy and a very hard worker.

“He’s very reliable and has a great relationship with his customers. I think he’s really found his niche with CrestClean.”