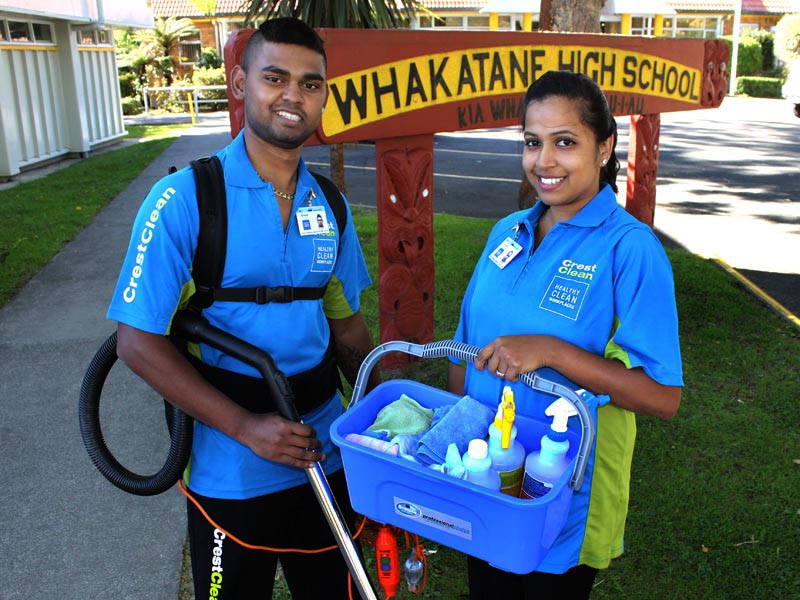 Running their own courier company turned into a long hard road for Akshay and Naina Kumar.

The young Rotorua couple wanted to work for themselves – but the reality soon kicked in when their work/life balance got seriously out of kilter.

Twelve-hour days began to take a toll, leaving them exhausted with little time for anything else. “It was really tiring and very hard work,” said Akshay.

And then there was the extra hours spent on paperwork to keep the books balanced. “Sunday was the only day we could rest or have time with our family,” he added.

The couple soon realised something had to change, with the turning point coming when they decided to purchase a CrestClean franchise in nearby Whakatane.

Ironically, it had been Akshay’s family that first floated the idea of a cleaning franchise, just before the couple decided on a courier business. Askshay’s mum and dad, Hemant Rajni Kumar, run a successful CrestClean franchise in Rotorua.

Since joining CrestClean, life for Akshay and Naina has never been better. The couple, both aged 25, enjoy the work and Akshay says his customers respect the fact he’s a business person. “They don’t look down on me.”

“My customers are really friendly and I’m happy to do extra work for them.”

Akshay said CrestClean takes the headache out of doing the paperwork for their business.

“When I had my courier business I had to do all my own accounts and it meant a lot of my free time was gone. Crest does it all for you, it’s really great.”

Akshay says they love living in Whakatane and the town has much to offer.

“I have a totally different lifestyle now. We have a lot more time together.”

Bill Douglas, CrestClean’s Regional Manager for Rotorua, Whakatane and Taupo, said Akshay and Naina are well thought of at Whakatane High School, which is one of their customers.

“They are very good at what they do. The school thinks they are great and they have excelled.”

Bill said they were an example of how age was no barrier to success with CrestClean.

“They are a young couple and it just shows you can have a successful business at a young age.”

Whakatane is one of the areas on CrestClean’s Move to the Regions Programme. The programme pays up to $3,000 relocation costs to help families settle to areas where Crest needs personnel.

Dozens of families have shifted to provincial New Zealand, where they are enjoying the benefits of cheaper housing and a great lifestyle.