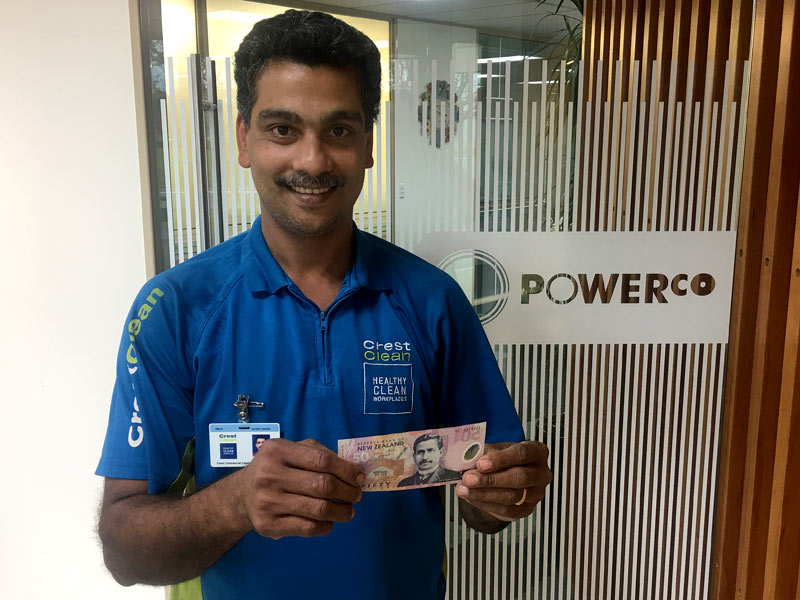 Lipson Varghese plans to spend the $50 prize on pizza for his family.

Switched-on franchisee Lipson Varghese has won the praises of a senior boss at a national power company.

Teresa Richards, Facilities and Fleet Manager, Powerco, is so impressed with the standard of cleaning by the 44-year-old that she says she wishes there were more than one of him!

Palmerston North-based Teresa says she’d love to see the high standard of cleaning delivered by Lipson achieved at the company’s other locations.

In a letter to Lipson thanking him for keeping her informed on the timing of carpet cleaning work at the Palmerston North complex, she adds: “Lipson, can I say also how awesome the place is being kept.

“I am so appreciative. Wish I could clone you and have the same great service at all our sites. Thank you so much.”

“Lipson is one of our largest franchise owners in Palmerston North and has a reputation for looking after his clients.”

And Lipson’s hard work and dedication to providing an unrivalled service to his customers has not gone unnoticed by CrestClean.

Lipson has picked up $50 for winning the company’s quarterly prize for the most Certificates of Excellence Awards.

Brad said he was delighted at the glowing feedback about Lipson. “Teresa just can’t speak more highly of him. He goes above and beyond what’s required for all his customers.”

Brad added that with great franchisees, his region was set to go from strength to strength.

“While Lipson has been recognised in writing by a customer, there are a lot of other franchise owners who are certainly getting the same sort of feedback.

“It makes my role really worthwhile when I receive such feedback.”

Lipson is originally from southern India. He and his wife Jincy, a radiology department nurse, settled in Palmerston North after she landed a job at the city’s hospital.

After arriving in Palmerston North, Lipson initially worked in a New World supermarket as a shelf filler. He was introduced to CrestClean by a friend in Auckland.

“He told me it’s a good job and you can make lots of money,” said Lipson.

And his friend was not wrong. “There is heaps of work here in Palmerston North,” said Lipson.

“I am very happy with my business. I enjoy everything about my work.”

But he particularly appreciates the support of his Regional Manager. “Brad is very friendly and keeps in touch with me to see how I’m doing. He’s great.”