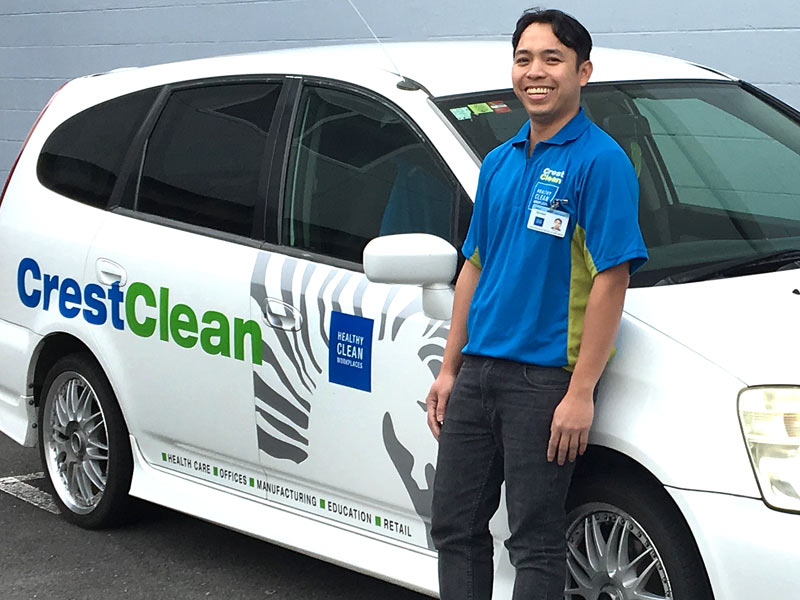 Billy Tagod has his sights set on buying a home for his wife and young family.

When Billy Tagod was working at a Hamilton fuel station he had no idea a chance conversation with the guy who came in to clean the windows would be the start of a journey that would change his life.

The young dad had been thinking about looking for a job that would be better paid and give him more time with his family.

He found that with the long hours he spent at the Mobil station, and with his wife Maria also working as a nurse, there was hardly any time left for her and their young baby.

And the answer to their dilemma proved to be right in front of him at work. Each month when the windows were cleaned by the CrestClean franchisee, Billy would get into a conversation. As time passed he got to hear more about the opportunities and the flexible lifestyle that comes with owning your own business.

Fast-forward just one year on and Billy can’t quite believe how much his life has changed – now that he’s the owner of a CrestClean franchise.

“Before I had a CrestClean business I was working 2-10pm shifts. When I got home my wife was already asleep and when I woke up my wife is already at work,” he said.

“There was no quality time to spend together.”

As his first anniversary with CrestClean approaches, Billy says he’s never been happier in his work and he enjoys being a small business owner.

“The business is going well so we have decided to expand next year.

“We are planning to buy a house within the next two years. I know that with CrestClean this opportunity will be possible.”

Working for himself is a far cry from Billy’s early career, when he spent five years working for a commercial shipping company. He left a life at sea to move to New Zealand from the Philippines after his wife got a nursing job in Hamilton.

The couple, who were school friends in the Philippines, quickly settled in Hamilton. At first Billy got a job coal mining in Huntley and later did some labouring for an agency.

But although he had no issues with his job at Mobil, he decided he needed a change from his cashier’s job and began thinking what else he could do.

“I saw a guy who was a CrestClean franchisee cleaning the windows,” Billy, 34, said.

“He said: ‘definitely, you will earn good money unlike some other cleaning companies’. He told me CrestClean was a very stable company.

“CrestClean not only gives me the opportunity to earn good money, but to spend quality time with my family,” he added.

Billy’s CrestClean customers include a school, childcare centres and a restaurant. But apart from the satisfaction of being his own boss, Billy says he enjoys the work and doing the best he can for his customers.

He recently had chocolates left for him by a grateful customer. “They said: ‘thank you for cleaning our site, we really appreciate it. You do a good job’.”

“It’s very overwhelming and I really appreciate them doing this,” Billy said.

“He’s doing great work and he has a good relationship with all his customers. He’s always smiling and very happy in his work.”

“He’s certainly got himself into the right business where he’s going to do really well.

“Owning a CrestClean business brings financial freedom and people can get ahead very quickly.”