Joining Crest a life-changer for family 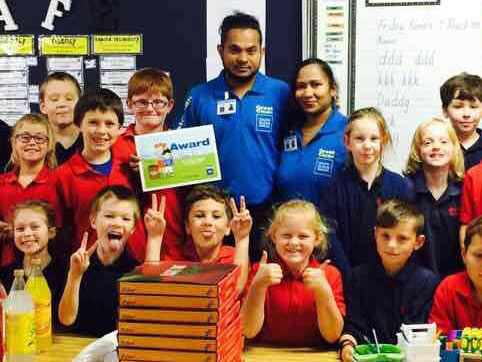 Aznayne Ali and his wife Anjeline Sahayam with kids at Milson School in Palmerston North where they handed out pizza to kids for the Cleanest Classroom Award.

Joining CrestClean has been nothing short of a “miracle” and has been an absolute life changer, say a grateful husband and wife team from Palmerston North.

Aznayne Ali and his wife Anjeline Sahayam turned their back on Auckland in the hope that provincial New Zealand would give them a better lifestyle.

With Auckland’s skyrocketing rents and high living costs, the Manawatu township seemed a sensible option – particularly as they have family living there.

But what they hadn’t bargained for was that securing a job for Aznayne might take time. Despite his qualifications and experience as a mechanic, jobs in his chosen field were not easy to come by.

With Anjeline now pregnant, the couple soon found they urgently needed to find something to bring in an income. Money became tight and they wondered how they were going to cope.

“When we moved to Palmerston North we were just dependent on our savings,” said Anjeline.

“We could see our savings were rapidly going, it was a hard time.”

Buying a cleaning business became an idea after they met a CrestClean franchisee who also attended the same mosque in Palmerston North.

Now, just seven months later, Aznayne and Anjeline say they couldn’t be happier. Their business is booming and it has increased in size by more than 50 percent.

“My family said a miracle has happened. It has changed our lives financially by joining Crest,” says Anjeline, 34.

“Brad is awesome, he’s a good guy and gave us great advice,” she adds.

“Now we are so happy and we are telling all our friends that if you are thinking of investing in a business go with CrestClean, they are the best people.”

Anjeline says they like the fact that being a franchisee means CrestClean takes care of the accounts and they get a regular pay cheque.

“We get paid on time and we don’t have to worry about anything. We do our job and our customers are happy with us.”

Brad said Aznayne, 39, was a hard worker and was popular with his school customers.

“He is a fantastic operator and started at Milson School in Palmerston North at the beginning of this year. The school is very happy with his work.”