Award gets pride of place in home 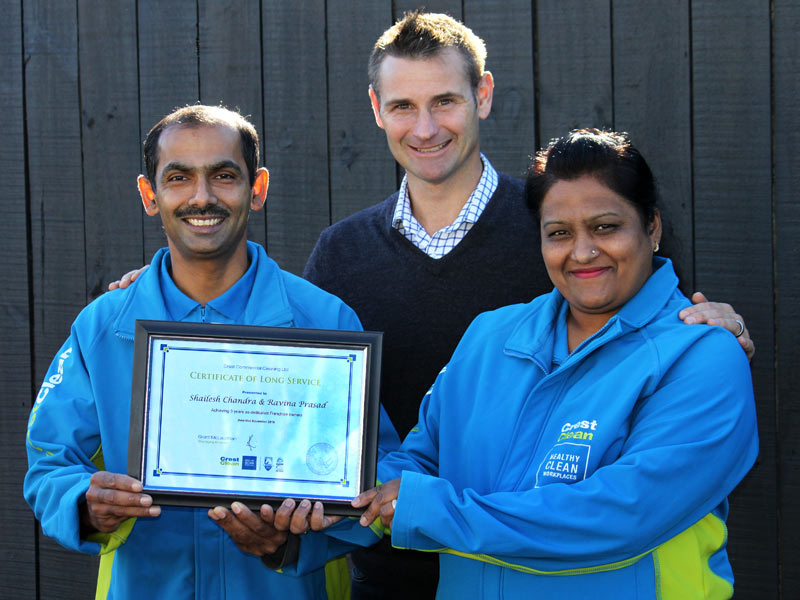 There wasn’t a moment’s hesitation when they were asked what they plan to do with their framed Long Service Award certificate.

“It will go on the wall in the sitting room so everybody who comes to visit can see it. We are very proud,” said Ravina Prasad.

And her husband Shailesh Chandra’s big grin left no doubt that the Tauranga couple couldn’t be happier after three successful years as CrestClean franchisees.

The extra income generated by their cleaning business has helped to finance their spacious three-bedroom home in Greerton.

“We have our own business and a home. Life is really good,” said Shailesh.

The couple were introduced to CrestClean when Ravina began doing some part-time cleaning for a friend who owned a Crest franchise.

“I helped for three months then I told my husband we should really buy a franchise,” she said.

Ravina gave up her job working at a Four Square supermarket in Greerton to concentrate on their franchise.

Meanwhile, Shailesh decided to continue with his full-time job working as a bus builder in Tauranga.

The couple work together in the evenings and their customers include schools and offices. “We really enjoy the cleaning. We are our own boss and it feels really good,” said Ravina.

“It can be a little hard at times in the winter when it’s cold – but it’s worth it.”

Jan Lichtwark, CrestClean’s Tauranga Regional Manager, said home ownership was a big thing and he was seeing more franchisees being able to get a foot on the property ladder.

“It makes me really proud and pleased to see people achieve their goal and be able to buy their own home.

“Owning a CrestClean franchise puts people in a good position for borrowing. CrestClean has a great reputation and banks know that people who own a franchise are always going to be in work.”

Jan said Shailesh and Ravina had got to where they are today through hard work.
And they had brought in new contracts through personal recommendation from very satisfied customers.

When an office changed hands the new occupiers signed up with CrestClean after hearing how good Shailesh Chandra and Ravina were at cleaning.

And Shailesh and Ravina were in demand after they did some temporary work for Jan.

“Six months later they rang back and said ‘the lady we had has left… can we have the couple we had last time. We only want them’.”