Commitment sees his business take off 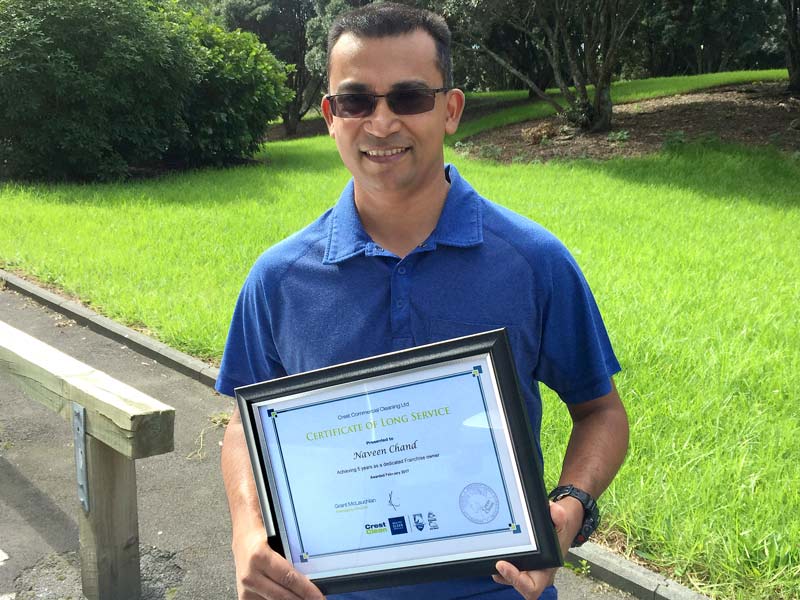 Naveen Chand with his Certificate of Long Service.

Joining CrestClean five years ago ticked all the boxes for Naveen Chand.

He was looking for something that would still allow him to work his daytime business importing car accessories.

“I needed some extra income and decided to go with CrestClean,” says the Auckland franchisee.
“I had done some commercial cleaning when I was a student so I knew what was involved.”

But what particularly appealed to him is that CrestClean takes care of all the paperwork and the accounts.

“I liked the system. There’s no chasing customers for payment or anything like that. It’s simple and everything is taken care of,” he added.
“The investment was not that great with CrestClean to get started with a franchise.”

Over the past five years Naveen has grown his cleaning business more than fourfold.

Being a successful CrestClean franchisee has brought him personal satisfaction.

“It’s something I’m proud of and I’ve worked hard to build up my business. It’s gone so quickly.

Naveen has also been an Induction Trainer for CrestClean’s new franchisees.

“It’s good to help people who are new in this business,” he said. “I have learned a lot in the five years I’ve been with CrestClean.
“It’s rewarding to see people who go out there with the skills and confidence to start their own small business.”

Not one to rest on his laurels, the 45-year dad devotes some of his spare time on two other business interests. He and his wife Rehana import ready-to-eat poppadoms. The savoury treats, produced from lentils, are marketed as being a healthier snack.

The business idea was hatched after they came back from holiday on the Gold Coast.

“On the Air Asia flight they had poppadoms and my wife really liked them,” Naveen said.

“When we got back we got in touch with the manufactures. They sent us samples then we put in a small order in. We are trying to get into some health shops here. We’ve just got the website up and running.”

Naveen also finds time to get creative with his carpentry skills. He specialises in building mud kitchens and outdoor table furniture for kindergartens and day cares. His wife works at an early childhood centre.

“He’s someone I can trust with anything. Five years so is a great commitment to CrestClean.

“He’s consistently delivered in his business and provided jobs for other people. That’s quite a big deal.”