Our new home is ‘out of this world’ 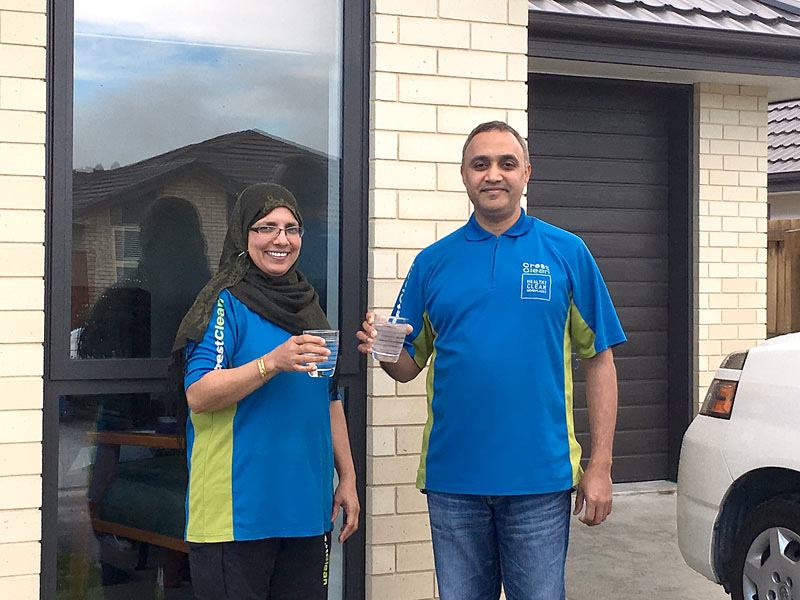 Nasreen and Nisar Kaskar invited CrestClean personnel to a housewarming party to celebrate moving into their new Christchurch home.

As an accountant, Nisar Kaskar had crunched the numbers and knew what it would take so he and his wife Nasreen could one day have a home of their own.

And to chase that dream the Christchurch couple set about looking for a business that was easy to manage and would provide a second income stream to help them get a foot on the housing ladder.

Before moving to Christchurch, Nisar had done the accounts for a coffee distribution company in Auckland. The couple who owned the company also ran a commercial cleaning company.

So when Nasreen checked out the possibility of purchasing a CrestClean franchise it was an industry her husband was more than familiar with – and he knew it was sound bet.

“Crest was the right partner from day one.” Said Nisar. “We got the support and the whole process and the setup is so good that we don’t have any stress.

“We just do the job and we can go home.”

Their business has been a huge success. From their initial investment they have tripled the size of their cleaning business and at the end of last year they moved into a brand new home.

The three-bedroom property is in one of Christchurch’s new subdivisions. Moving into their new home felt ‘out of this world’, says Nisar.

“I was renting for 10 years and I was going nowhere,” he added. “We now feel privileged and really appreciate that we have come to that stage where we can own a house.

“The feeling is out of this world. It’s a milestone for us because we just want certainty for our future and for our kids.”

The couple are originally from India and they came to live in New Zealand in 1999.

Nisar had been working as a project accountant for a construction company in the Middle East. But after six years in the job, and with long periods away from home, Nisar decided to look at moving to a new country.

With a job offer in the wings and their immigration application under way, they eventually settled in Auckland.

Later they moved to Christchurch when Nisar’s employer moved the accounts department to the Garden City. Buying a business was an obvious decision for his family to get ahead, he says.

“Mentally I was prepared to do extra hard work. We are first generation migrants and knew we had to put in extra effort to establish ourselves. Everybody in our positon is doing the same.

“It’s been rewarded as we can see the benefits. My mum joined us from India so she looks after our kids and it’s all working out nicely for our family.”

Nisar’s success has inspired several of his friends, who have gone on to buy a CrestClean franchise.

“Anybody can make money if they are willing to work hard,” said Nisar, 50.

“I keep telling people they should take the first opportunity to buy. I have seen the benefits.”

“They understand they had to put in the hard yards in New Zealand to get ahead. I’m really, really proud of them that they’ve managed to buy a house.”