Pride in owning their own business 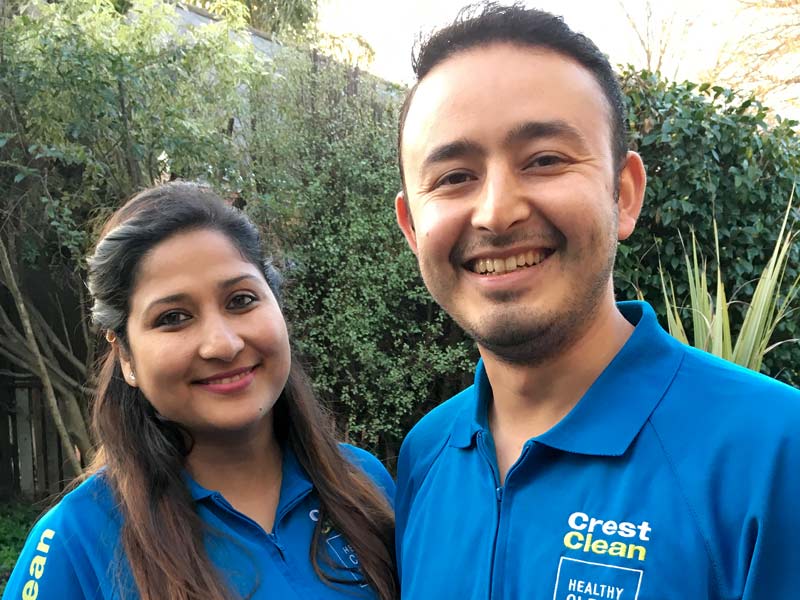 Binu and Lokendra Bista are saving to buy a home in Nelson.

Lokendra Bista says owning a cleaning business has fulfilled a long-held ambition to be his own boss.

Having a CrestClean franchise has given him the confidence to look at bigger things, he says. “It’s given me a sense of ownership. It’s my company and I own the business.

“Have studied business in my background I’ve always wanted to become a business person. This is the first step of getting into a big business. With Crest I’ve learned a lot of things,” he added.

Lokendra arrived in New Zealand from Nepal in 2014. His wife Binu had travelled to Nelson a year earlier to study accounting – but the young couple had found being apart was not easy.

Hardly surprising really as it had been a little over a year since they had tied the knot in their homeland of Nepal. With Binu on her course in Nelson, Lokendra had remained in Nepal where he worked for a car company as an assistant manager.

After moving it didn’t take Lokendra long to find employment in Nelson. He got a job at Z Energy as a customer service representative.

Within a year he gained promotion and still manages one of the company’s sites, looking after nine staff members.

Binu also works at another Z Energy site as a barista as well as working on their CrestClean business in the evenings.

Lokendra says he loves living in New Zealand – but it took him some time to get used to everyone being so friendly.

“When I went out each morning people would say ‘hi, hello, how are you?’

“I used to say to myself ‘why are they talking to me, I don’t know them’. It’s totally different from what we had experienced back home in our country.

“They are very nice people here and it’s a very lovely country and I like the Kiwi culture.”

Home ownership is on the couple’s radar. “After buying our Crest franchise we can now plan to buy a house because of the extra income. My target is to have a house in two years’ time,” Lokendra, 29, added.

CrestClean’s Nelson Regional Manager Barbara de Vries says Lokendra and Binu have worked hard to build up their franchise over the past year.

“They started off with a small business and found it was easy after a while and they decided to double the size of their business.”

She said not only are the couple hardworking, they are great “ambassadors” for the company.

“They are always looking for new people to join CrestClean and have promoted Crest to their friends and family.”

They introduced their friends Shantosh Gharti Chhetri and Susma Gautam Gharti Chhetri, who moved from Christchurch to Nelson to join CrestClean.

“I got them interested in coming to Nelson and I shared my story with them and told them how Crest works and finally they decided to buy a cleaning franchise,” said Lokendra.

CrestClean franchisees are in line for a referral bonus of $500 when someone they introduce to the company goes on to purchase a franchise.