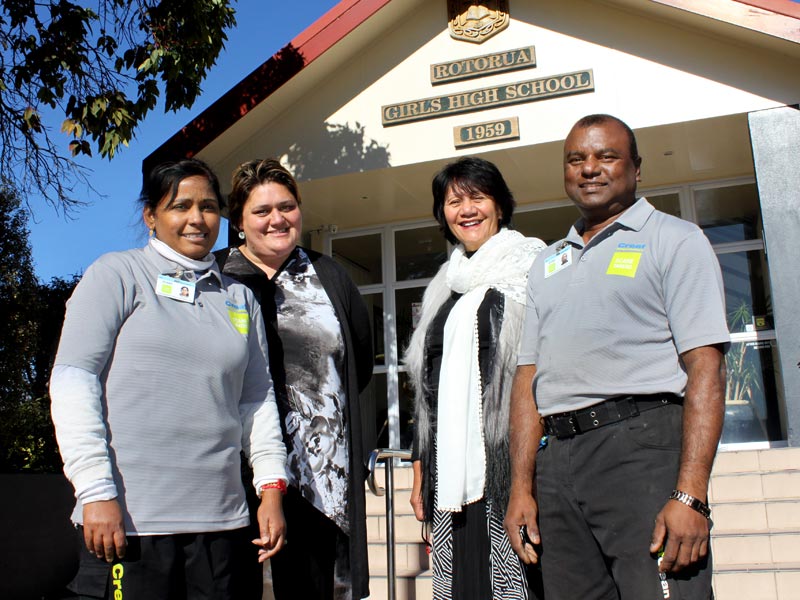 From the day Hemant Kumar and Rajni Chand took over caretaking duties the difference was remarkable, she says.

“The first day they were here as early as I was and the place was spotlessly clean.”

Ally said nothing was too much trouble for the husband and wife team. “They are so accommodating and you can ask them anything and it’s no problem and they are there within an instant.

“One day I had some marks on my carpet and I mentioned it. Next minute they were both on their hands and knees and it was gone.”

Crest Property Care provides schools with a viable alternative to directly employing a caretaker. All Crest’s caretakers have a trade background.

“Hemant has a diesel mechanic background and he’s also handyman. He is a perfect fit for the role.

“He can turn his hand to just about anything and he’s just fallen into his niche with caretaking. He loves what he’s doing and enjoys fixing things and making things look good.”

With a large school to look after, the caretaking position at Rotorua Girls’ High School is a two person job.

“Rajni is lovely and they are like twins as they are together all the time,” says Bill. “She helps him with all the work, whether it’s lawns or gardening, and she is a very hard worker.”

Ally admitted that opting to have the caretaking role contracted was a new departure for the school. But any concerns quickly vanished, she revealed. “It is a new concept and I suppose I was a bit nervous.”

“The first week I saw Rajne raking up the leaves and I hadn’t seen that for a long time.

“What I’m pleased about is their work ethic. They want to do a good job for us. Nothing’s too big for them to do and they are just lovely people to work with.

“You have got really satisfied 100 per cent customers here!”

She said the couple had made a big difference to the school’s appearance.

“I used to walk around and I used to be picking up litter. I walk around now and it’s just beautiful. They have taken it up a whole different level.”

She had been particularly impressed at Hemant’s mechanical ability. “He fixed a clothes dryer that we thought was ready to be thrown out.”
Having the school and its grounds looking good was a must, she says.

“As soon as you come into a school you get a feel for it. I’ve been into schools that haven’t got high standards and you can see it. I’m really proud to take people around our school.”

Chris Nairm, Chairman of the school’s Board of Trustees, paid tribute to Hemant and Rajni in a letter thanking them for their “great work”.

“The board have been impressed with your professionalism, dedication and willingness to carry out any tasks asked of you. Overall, the school is looking great,” he said.