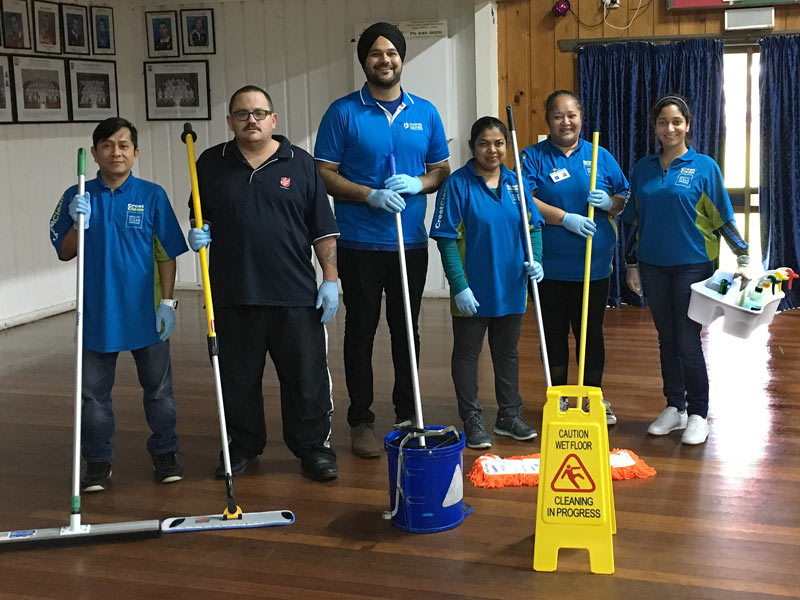 Attending a course run by the Master Cleaners Training Institute has given Clinton Storer a whole new outlook to the way he approaches his job.

Clinton, who works at the Salvation Army complex in Hamilton, joined CrestClean personnel on the Module 1 programme.

As the charity’s caretaker, Clinton is responsible for cleaning duties for the two buildings, which include office areas, a church and a commercial kitchen.

“He has certainly come back with a new vigour, and has given me a long list of things he now needs to do his job properly.”

Beverly was delighted that CrestClean had provided a place for Clinton on the course.

“He’s never been employed doing cleaning before,” she said. “It was little things like mopping the floors, just leaving them to dry versus using a squeegee mop on top afterwards.

“He was doing the cleaning but it was never as good as when we had commercial cleaners in.”

She said Clinton had learned new ways to carry out his cleaning tasks. “He’s come back with lots of ideas. Jut things like using the right products for the right job.

“Just wiping a surface doesn’t necessarily make it look cleaner because if you are wiping it with the wrong type of cloth or the wrong product you’ll have big wipe marks everywhere. That’s the type of thing that was happening.”

Adam Hodge, CEO of the Master Cleaners Training Institute, said Clinton threw himself into the training.

“He took a really active part in the course and fitted in really well with everyone. He had a good positive attitude.”

Adam said unlike the CrestClean personnel on the course, Clinton was starting from scratch.

“For the likes of anyone like Clinton who hasn’t been through our induction training, it’s quite an eye opener.

“Everybody just thinks you pick up a mop and mop the floor but when franchisees come to module 1 they have already been through induction training and they will have an idea of what they should be doing.

“Clinton’s learned some new processes and procedures and what’s required to safely provide the quality cleaning in his workplace.”

Adam said he’d been delighted to accommodate Clinton on the training course.

“These are good guys doing a good job. It’s CrestClean giving something back to the community and we were only too pleased to help out.”