Beanies a hit with kids 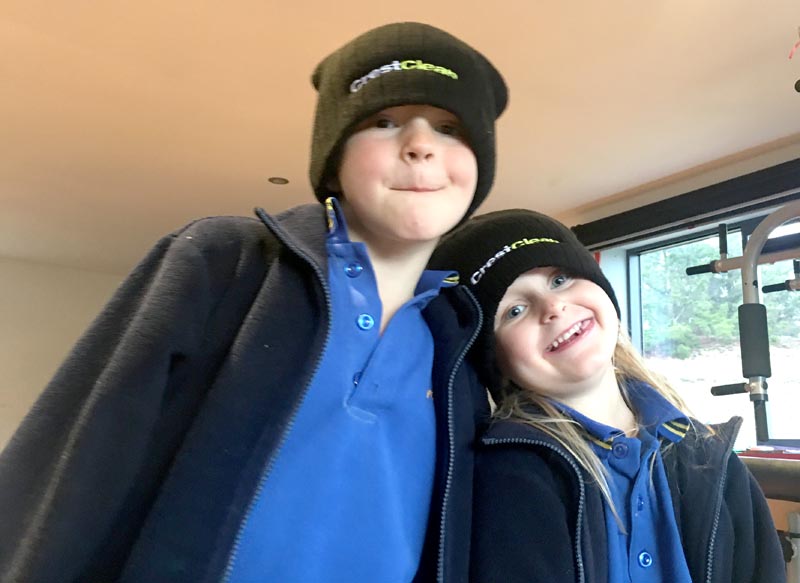 James Dixon lost two of his beanies to his children Luca, 7, and Elina, 6.

James had just opened the box containing six CrestClean Beanies when the smart new hats caught the attention of his youngsters, Luca, 7, and Elina, 6.

And in the blink of an eye two of the beanies had gone missing!

“Anything labelled in Crest they just want to get into,” said James. “As soon as the beanies arrived I cracked them open.

“I left them sitting on my desk and the kids grabbed them and pretty much helped themselves.”

The CrestClean Beanies are a new addition to the uniform and have recently been released for purchase on Team CrestClean website at $14.50 each. There has been a flurry of orders as winter’s icy grip spreads over much of the country.

James bought six beanies to help his team keep cosy in the Deep South. “We’ve had a few minus 4C mornings so far. We get six frosts out of seven days each week.

“It’s been pretty much like this for the past four or five weeks. July is the coldest month in Central Otago and you definitely need something on your head to keep warm.”

Now James is having to reach for his credit card to buy extra beanies. “I’m pretty much going to have to order two more beanies to replace the ones the kids have got.

“The kids love them and their mum is going to put a label on them so they don’t get mixed up.”