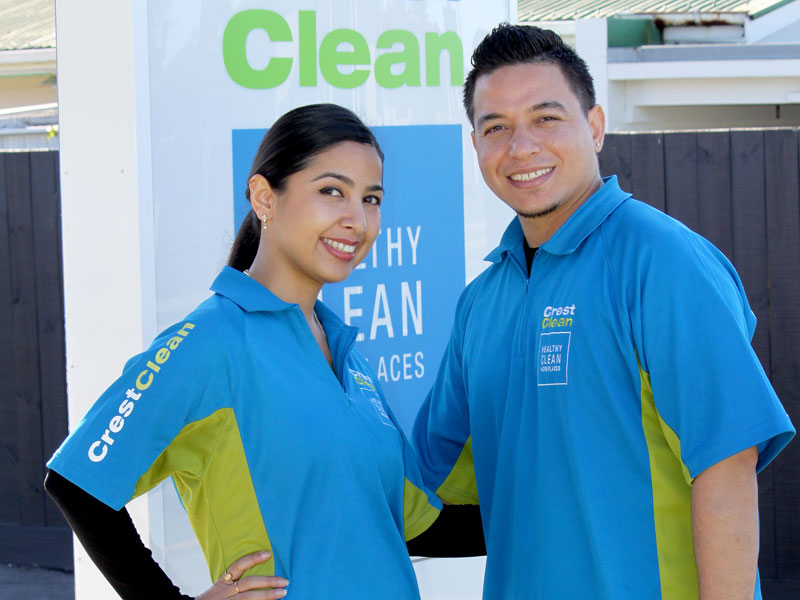 Before moving to New Zealand Vrinda Nautiyal and Sandeep Sharma had management roles at 5-star hotels in India.

Customers of a young couple who have just joined CrestClean are in for some five star service.

With a background in working in top class hotels, Vrinda Nautiyal and Sandeep Sharma are no strangers to hard work and have come from a high-pressure service industry where quality is king.

The husband and wife team have recently joined CrestClean’s Taranaki team and already they are making a big impression.

Prasun Acharya, CrestClean’s Taranaki Regional Manager, said Vrinda and Sandeep were energetic and excited at starting their own small business.

“They are a lovely couple and are very smart. They are hardworking and I can see they will be very successful with their business.”

Vrinda, 27, and Sandeep, 33, are originally from northern India and moved to New Zealand four years ago. They met at college in India where they were both studying hospitality.

After graduating, Vrinda beat thousands of other applicants to land a prestigious management trainee position with the Taj Hotel group, which has a chain of 5-star luxury hotels throughout India.

Sandeep’s career also took off and he secured a position as a kitchen management trainee for the same hotel chain.

But although they enjoyed their jobs, they were frequently on the move as Vrinda’s training meant she would be sent to work at a different hotel every two months.

Sandeep said it was while living in Delhi that they finally decided to look at downshifting and moving to a country that offered them the work-life balance they had been seeking.

They wanted a complete lifestyle change from the long working hours and stresses of living in some of India’s large overcrowded cities.

“Delhi is a city of 21 million people. Traffic is so bad there if you have to go from one end of the city to the other it can take four to five hours.”

They began to research countries that would give them a more relaxed lifestyle.

Vrinda said after living in Delhi, Mumbai, Banglore, and Calcutta they were ready for a change. “We didn’t want a very stressful city life anymore.”

They considered the UK, the United States, and Canada before opting for New Zealand. At the time it rated the fourth happiest country in the world in a United Nations survey on the best places to live, she said.

“When we researched and looked around and spoke to all our friends and relatives all over the world, we zeroed in on New Zealand.”

Sandeep added: “Both of us have spent most of our lives in big cities in India and that’s really stressful. We are peace loving people and we love to stay close to nature.”

Both hail from the picturesque Himalayan region of northern India, close to China.

“The most important things for us are good food, good air and good water and good facilities. New Zealand is a country we found that you can have these things together,” he said.

“We love this country, we love the people and everything here is so nice. This is what we were always looking for. We are here and we feel so lucky.”

Before moving to New Plymouth Vrinda and Sandeep lived in Tauranga. As well as undertaking a business management course, Sandeep worked as a chef at a Japanese restaurant in the coastal city and later at Tauranga’s luxury Trinity Wharf Hotel.

They’ve found Taranaki the ideal place to settle and their CrestClean business allows lots of time together, they say.

“We like walking and hiking because we are from the Himalayas and that is a big thing. The mountain reminds us of home,” says Vrinda.

“People are nicer in the smaller cities and far more helpful and there’s a sense of community.”

Sandeep was excited at their new start. “We are the kind of people who want to mingle with other people and learn the Kiwi culture so that we can grow personally and professionally.”

He said they had done a lot of research before buying a CrestClean franchisee.

“We wanted to start a low risk business. We are both hard working and we give 100 per cent whatever we do.”

The cleaning industry, he said, had a lot of opportunity for growth. “It’s not seasonal, no matter how the economy is there is still a need for cleaning.”

Taranaki is one of the areas being promoted under CrestClean’s Move to the Regions Programme. The programme provides people who would like to own their own business with an opportunity to move outside New Zealand’s major cities.

New Plymouth offers a great outdoor lifestyle where homes are “affordable” compared with many metropolitan areas of New Zealand. Under the Move to the Regions Programme, Crest contributes towards relocation costs to help families settle outside of the country’s major cities.