Great start for our youngest team 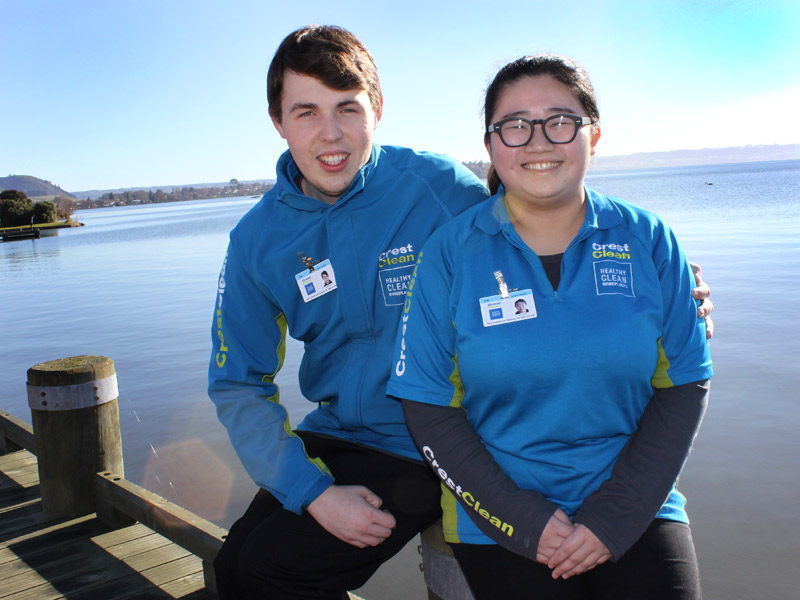 The Rotorua couple couldn’t believe how easy it was to start their own cleaning company and say it’s not only profitable, it’s the best job they’ve ever had!

Jacob Lowry, 20, and Debbie Zhu, 21, have shown age is no barrier to starting out on your own. And although it’s only a few months since they bought a CrestClean franchise, they are already talking of plans to take on more work and expand their business.

Sam Lewis, CrestClean’s General Manager Franchise Services, said Jacob and Debbie were among a number of recent young newcomers to the company

“We have quite a few franchisees in their 20s running successful businesses and doing extremely well.

The young couple have been together for four years. Debbie is originally from China and came to New Zealand to study, aiming for a career in the hospitality industry.

Jacob still works as a checkout supervisor at Rotorua’s Countdown supermarket. They decided to look at buying a business so they could spend more time together.

Now they love being their own bosses and the flexibility of working the hours they want. Debbie says they are “proud” to have their own company.

“It’s still a small business but it’s our own business. If we can handle more work we will definitely expand our business later on.”

Jacob said Rotoura offered a great lifestyle and was affordable in comparison with Auckland, where he used to live.

“It’s a beautiful city that gets a lot of tourists and is a great place to live. That’s one of the reasons we decided to stay here.”

For Debbie, who came to New Zealand when she was 16, Rotorua is now definitely home. Although winter could be cold in the city, the air was fresh and clean and unlike China there was no smog, she said.

“In China there is a lot of air pollution and sometimes in winter it gets so bad you can’t see across the road. In comparison, Rotoura is really heaven. I love seeing the beautiful blue sky here.”

Debbie says her career change had initially not gone down well with her parents, who still live in China. Cleaning there would be seen as a lowly occupation with very poor pay and no prospects.

“It’s not viewed as a nice job to have. There’s no training and it’s not seen as a profession.

“At first my parents didn’t understand why I chose to buy a cleaning business. They assumed cleaning in New Zealand is the same as in China.

“After I told them about CrestClean and about the training and how it all works they were happy for me.”

So what’s it like working together? “It’s fun and we get along well when we’re working,” says Debbie, who used to work at a local food and beverage outlet.

“He does the vacuuming and I do the cleaning. If he’s finished before me he’ll come and help me.”

“For some young people, starting out in business can be a daunting task but we simplify the process.”

He has seen many franchisees quickly get ahead with in their business and personal lives, often being able to afford their first home within a short time.

“People get a business loan and once they’ve paid down a certain amount of equity they can use that equity to jump-start themselves into homeownership, which is fantastic.”

Bill Douglas, CrestClean’s Regional Manager for Rotorua, Whakatane and Taupo, said Jacob and Debbie had made a wise decision to buy a cleaning business.

“Debbie has a very positive attitude and is very good at what she is doing. I think they will both do very well.

“I say good luck to them. If they stick with CresClean they can go a long way at that age.”