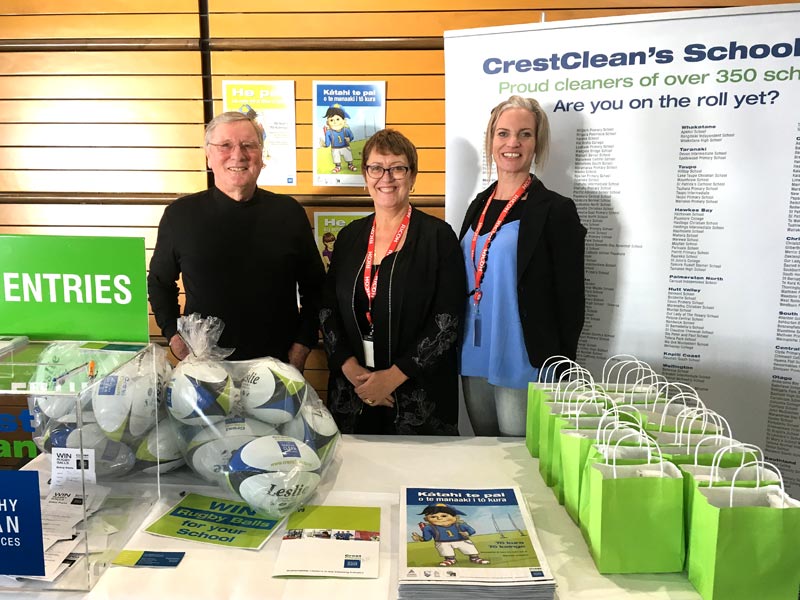 Marty Perkinson, CrestClean’s Chairman, with Caroline Wedding and Abby Latu at the conference.

Since they were released last year demand for the colourful posters has been strong throughout the country.

And they were still a popular freebie to take back to their school for head teachers attending the Te Akatea New Zealand Maori Principals’ Association Conference in Napier.

The posters were the brainchild of CrestClean’s Chairman of Directors Marty Perkinson.

“They thought the posters were unique and they all wanted copies for their school,” added Marty.

Marty was given an opportunity to address the conference, which was held at the newly refurbished Napier Conference Centre.

He began his presentation with a mihi – a formal welcome speech in the Maori language.

“I wanted them to know that we are serious in communicating with Maori principals and Maori schools. It’s why we do a mihi at such events and why we have our posters in the Maori language.”

Marty also took the opportunity to talk about the wide range of services CrestClean offers schools, from caretaking to cleaning and pest control.

Abby said more than 350 schools are cleaned by CrestClean and the event was an opportunity to meet new faces and give away packs of Crest’s School Posters.

“We had a lot of recognition so it was great to see people knew our brand.

“It was fantastic to be involved in this cultural conference. It was the first time this event has been held in Napier.”

A prize draw was held at the end of the event. Winning schools received a bag of LeslieRugby balls.

“It was great know these balls will be going to schools, and they were certainly gratefully received.

“Sport promotes the fitness and the wellbeing of our youth and we are delighted to be able to support schools in this way,” she added.