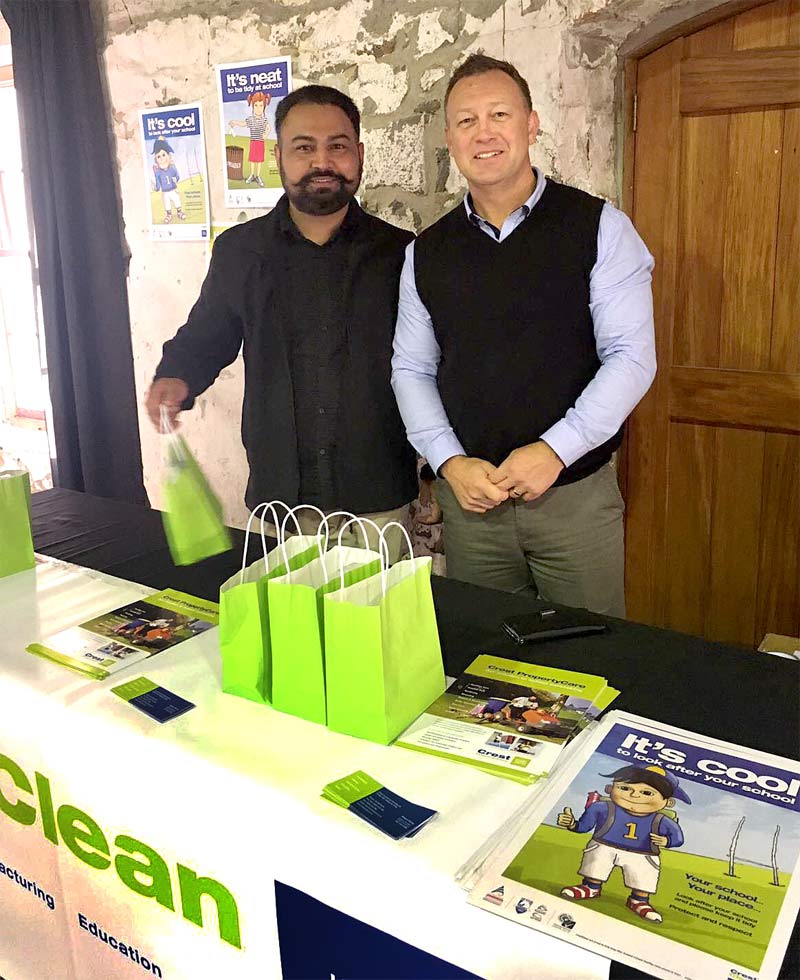 Being an early bird paid dividends for CrestClean’s South Canterbury Regional Manager at a teachers’ conference.

Crestclean was the only sponsor to be there for the full duration of the South Canterbury Principals Association Conference.

“We were the only sponsor to set up a stand and we offered delegates goodie bags and posters as giveaways, which were greatly appreciated and snapped up very quickly,” said Robert Glennie.

CrestClean’s school posters in English and Te Reo Maori were popular, said Robert. The colourful posters provide a friendly and fun reminder about the importance of hygiene and tidiness issues.

“They said they’d never seen anything quite like it. Many of the schools in South Canterbury have got them up, even ones we don’t clean.

“The smaller schools in the outer regions were all going to take them back and get a parent who does a bit of caretaking to put them up around the school.”

Crest was the first sponsor to be called on to speak to delegates after a lunch break at the event, held at Speights Ale House. There were about 20 principals attending from all around the greater South Canterbury region.

“I stood in front of the CrestClean display, which made for a great backdrop,” added Robert.

As delegates gathered around him by the Crest’s display, it set a precedent for other speakers.

“One by one the other sponsors were invited to speak, and they also presented in front of the CrestClean display. It was really great advertising for our company,” added Robert.

Delegates were given a CrestClean goodie bag – each filled with promotional products as a thank you gift.

Robert said the bags were not only well received, they sparked some great feedback from Ian Poulter, Principal of Bluestone School.

“He said the giveaway bags were a great idea. When he was at the New Zealand Principals’ Association conference in Wellington a couple years ago he got a goodie bag from Crestclean.

“Afterwards he decided to give Crest a chance to price his school for cleaning and they are now our client.”