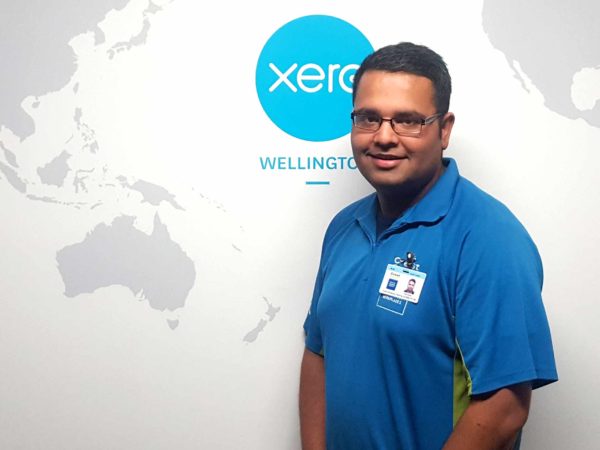 Naval Gupta loves working at Xero where he says he’s treated like a member of staff.

Hardworking Naval Gupta has a dream of where he wants to be within 10 years – hopefully enjoying early retirement!

The Wellington CrestClean business owner is spinning many plates in his busy working life, but it’s all part of his master plan to achieve financial freedom by the time he’s 35.

As well as being the helm of a thriving cleaning franchise, the 27-year-old is also a student and attends an IT course at polytechnic.

Naval packs in a lot in his working week – and there’s no let up at weekends. After a week of providing cleaning services for his Wellington customers and the many hours he puts into his studies, you’ll find him hard at work in his local Bunning Warehouse in a customer service role.

“The long term goal is to work until 35. Kind of retire and have enough investments so that I can travel,” he says.

Naval joined CrestClean just two years ago. After six months with the company his enthusiasm and people skills was recognised and he became a CrestClean Induction Trainer.

Every new CrestClean franchisee must undergo three weeks of training with an Induction Trainer, in order to prepare them to be out in the field, cleaning for their customers.

Philip Wilson, Wellington Quality Assurance Co-ordinator, said the role was a great fit for Naval. “Naval is responsible for providing quality training for new franchisees – a job at which he excels.

“His ability to train new teams is second to none. He’s very approachable, hardworking and always sets the right example.

“Naval is always available to our Wellington teams whenever they need advice on cleaning. His wealth of knowledge is a real asset to the business.”

Being an Induction Trainer brings him a lot of satisfaction, says Naval. “I am a people person I love talking to people.”

Naval says it’s vital to maintain high standards and stresses to newcomers to always do a professional job and put customers first.

“To me reputation is the number one thing. It’s what sets CrestClean apart from some other cleaning companies.”

Naval is very proud of his training record. “Of the 15 teams I’ve trained since I became the induction trainer, 13 of them still work for CrestClean.”

Since joining CrestClean in 2015, Naval has more than doubled the size of his business. He cleans many offices in Wellington but holds Xero closest to his heart.

“Xero are ranked number one when it comes to employee satisfaction in New Zealand. I love working in their environment every night,” he says.

“The support from the facility manager is great. They don’t see you as a cleaner they see you as part of the company.”

Before CrestClean Naval worked for Countdown as a customer services manager. He says being a CrestClean business owner has given him more flexible working hours and a big boost in income.

And he’s been able to buy an investment property and can afford two trips to India each year to visit his parents.

“A great thing about CrestClean is I can have holidays. Working for CrestClean definitely helps with the money,” he says.