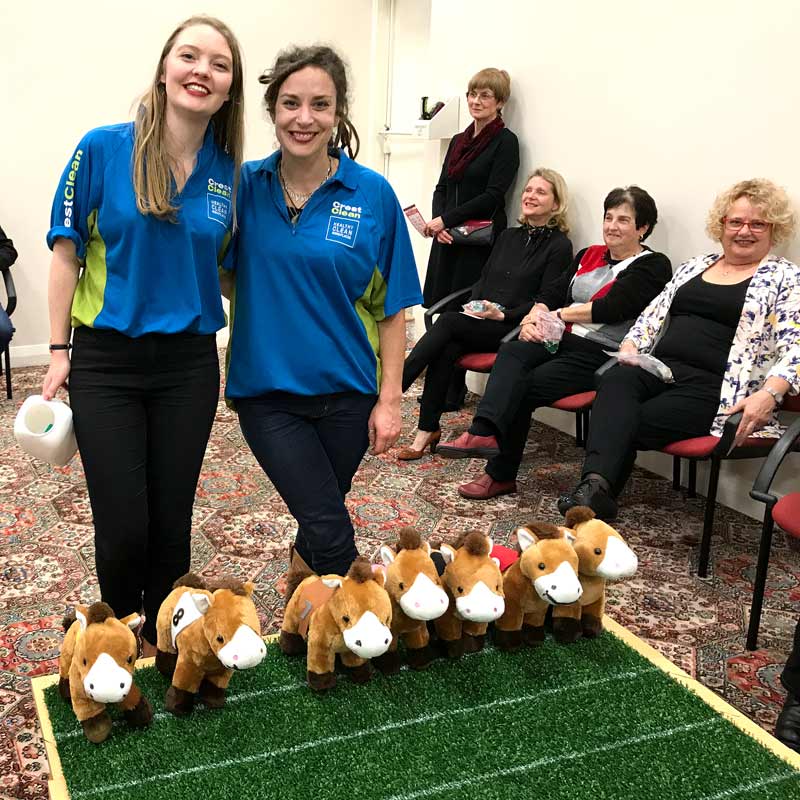 Fine fillies Victoria Triegaardt and Hayley Burns wore CrestClean tops for their role as stewards at the fundraiser.

Punters splashed out large for a flutter on ‘’horses’’ taking part in the Crest Classic.

The event was one of the highlights of fun night in Wellington to raise money to keep a community housing project in Fiji on track.

CrestClean’s Wellington Regional Manager Richard Brodie had the honour of naming and sponsoring one of three races involving toy horses. Each horse was auctioned before the action got under way.

The race began with stewards Victoria Triegaardt and Hayley Burns rolling a dice, which determined the progress of each horse along the miniature race track.

Richard said punters really got into the spirt of the event – many being suitably attired for the special night.

“Some people had dressed up for the occasion with bow ties and the ladies certainly wore dresses as if they were at the races. Everyone got right into the mood of it.

“It was a huge success from fun point of view, which is what it was all about.”

Participants at the event, organised by the Rotary Club of Port Nicholson, paid $30 on arrival and were given “funny money” chips to gamble with. A roulette table, manned by a professional croupier, and a dice game were also a big drawcard on the night.

But while big bucks were wagered on the outcome of the Crest Classic, all the bets taken added to the total amount raised by the charity night.

Another highlight of the evening was a prize draw, which came up trumps for Richard. He couldn’t quite believe it when he found he’d won a week’s free holiday accommodation at a top beach resort in Fiji.

He said the big win couldn’t have come at a better time. He and his wife Jan had just been thinking about a winter getaway.

“They spun the wheel and I realised I was a winner. I just turned straight to Jan and she was rapt.

“As soon as we got home Jan was straight on the computer to check out air fares. It was a huge unexpected bonus. It’s rare for us to enter a raffle but we sometimes buy a ticket if it’s for charity.”

The evening, staged at Wellington Bridge Club, raised $4,700. The money will go towards the $50,000 needed in Fiji to replace a truck at Koroipita Rotary Town (Koroipita) to enable the commencement of Stage 3 of the town’s community development plan.

The project’s two trucks have been used for the past 20 years to transport building supplies – but these have now reached the end of their useful life, the main truck clocking over 836,000km. They have been reconditioned in the past and are now beyond repair.

The humanitarian project will enable the provision of housing for impoverished families.

Rotarian Darryl Ross, one of the race night organisers, praised CrestClean’s backing of the project through Richard’s sponsorship.

He said in recent times many charitable organisations had noticed corporate sponsorship had fallen off.

“To have individuals or a company or organisation helping out is absolutely essential.”