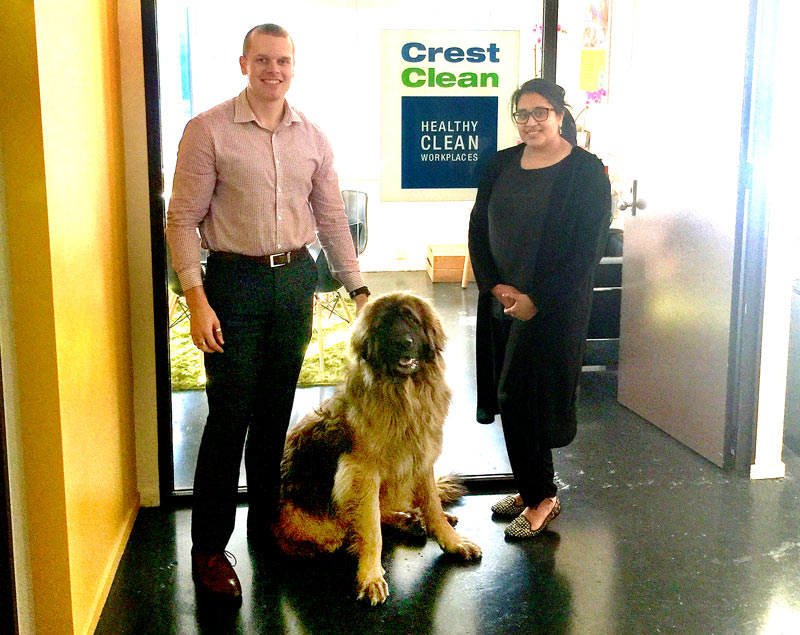 He’s a gentle giant who has free rein to unleash his unique charm on CrestClean customers and potential business leads – often with startling results.

The adorable canine, who weighs a hefty 75kg, has a dogged determination to make friends with everyone meets.

With his magnificent coat, lion-like mane, gentle temperament and graceful carriage, it’s hardly surprising he’s turning heads and proving irresistible to so many people wherever he goes with Zainab.

“People are fascinated when they meet him because he’s so huge,” says Zainab.

“When he stands on his back legs he’s a high as my husband who is six foot five.”

“It’s definitely an icebreaker. People see this huge furry lovable dog in the back of my car that just wants to lick everyone and make friends.”

When Zainab dropped in on a local school Leon’s presence in her car didn’t go unnoticed – it was a conversation opener, she says. “The principal came running out to pat him not knowing I was a CrestClean lady.”

Zainab credits Leon for helping to pave the way to sealing a deal. “It’s a school I took on as a new customer a few days later,” she added.

But apart from being a work companion to Zainab, Leon is also a trained therapy dog and is making a big difference in the lives of special needs children.

His visits to Wellington schools are always popular. Leon has also popped in to a rest home to cheer up elderly residents.

“We pretty much take him off the leash and leave him be,” says Zainab. “He goes around and smells the kids and finds one of the children or a group of children that he feels comfortable and sits next to them.

“They spend time patting him and they all get excited pull at him and he just lies there.

“He gives kisses or cuddles and shakes hands. He just knows where he needs to sit and who kind of needs his attention.

“The flow on effect of seeing an animal that’s so big and so gentle and its presence there seems to have a ripple effect with all the kids,” says Zainab.

Leonbergers are one of the largest German breeds and are classified as rare dogs. There are thought to only about 250 in New Zealand.

Zainab admits that she and her husband Rajiv Reddy were “not really dog people” before they got Leon.

“I wanted a dog that was really gentle, not to excitable or yappy and we like rare things,” she says.

“It just so happened when we were looking into the breed we found it does therapy work with special needs children.”

But there’s no escaping Leon’s popularity. “If I’m out walking with him I’m literally getting stopped every few steps,” says Zainab.

“We usually walk him at night otherwise people just stop us and we don’t get any walking done. People think he looks like a big bear.”

“He sleeps most of the time in the office on a mat or he wanders out to common areas of the hall. He makes friends with people in other offices. I’ve had people come in from the building across the road and downstairs.

“They come into my office looking for me so they can ask permission to pat Leon. He’s a bit of a walking advert!”