Samy’s NV200 is the ENvy of everyone! 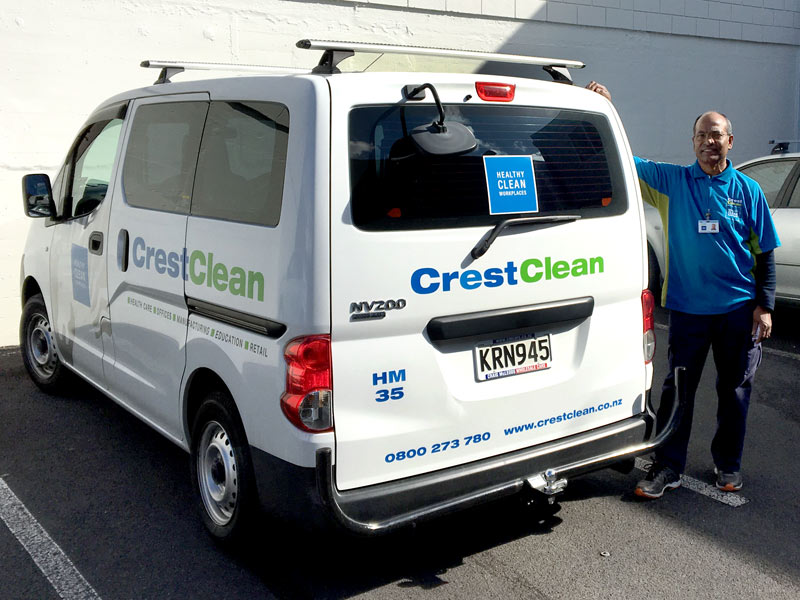 Samy Goundar is delighted with his spacious new NV200 van that’s been turning heads in Hamilton.

It’s turning heads in Hamilton with its sleek lines and good looks proving an instant talking point for passers-by.

And its new owner Dorsamy (Samy) Goudar is rightly chuffed with his Nissan NV200 – the latest addition to CrestClean’s Hamilton fleet.

The vehicle is the first NV200 for CrestClean’s Hamilton franchisees and everywhere it goes people seem quick to comment.

What has made this a standout vehicle is the striking eye-catching graphics, says Samy
.
And he’s lost count of the number of compliments he’s had since taking delivery of the van, which has replaced his ageing Toyota.

“Lots of people are commenting on it,” he says. “They tell me that it looks fantastic and they like the signwriting.”

A spin off, he says, is that it’s acting like a mobile advertising billboard for his business.

“Some people who stop to admire the van go on to ask about the business and how to get into CrestClean.”

Samy said when it came to upgrading his Toyota Noah he wanted a vehicle that would fit his business needs and had extra space. The NV200’s spacious interior and Nissan’s reputation for quality vehicles helped seal the deal, he says.

“It’s a good brand and it is quite wide and has a lot of room inside. I can carry my carpet machine in it and also my buffing machine. They both fit in really well.”

Nivitesh Kumar, CrestClean’s Waikato Regional Manager, said franchisees were being steered into purchasing larger vehicles that were specifically designed for light commercial use, such as the NV200.

“Samy took that advice on board and changed his old vehicle. He’s the first of our Hamilton small business owners to buy the NV200.

“The van looks very professional. It shows how serious our franchisees take their CrestClean business. And for us as a company it makes us standout with the van acting like a moving billboard.”

Nivitesh said investing in a spacious vehicle made sense for newbie franchisees. It meant they didn’t have to change to a bigger vehicle when their business expanded.

“Maybe they start with a $50,000 business and they get a small car. Later on they might expand to $80,000 or $100,000 and they find their vehicle isn’t big enough to carry the machines and extra equipment they purchase.

“It just makes economic sense to buy a larger vehicle at the outset.”

Samy, who is also an Induction Trainer for CrestClean, has been with the company for more than 12 years. Before starting his own cleaning business he was a social worker but got disillusioned by the long hours and poor pay.

“I was looking at some sort of business that would give me some money as well as giving me some exercise as well, which I needed,” he says.

He increased the size of his business to the point where he was able to quit his day job.

“I’m proud of working for Crest and proud to be an induction trainer. I really enjoy it. I’m happy to help these guys who come into the business.

“As an Induction Trainer I’m the first person they meet and I like to help them build up their business. I speak to them quite a bit about the progress I’ve made so they get inspired.”