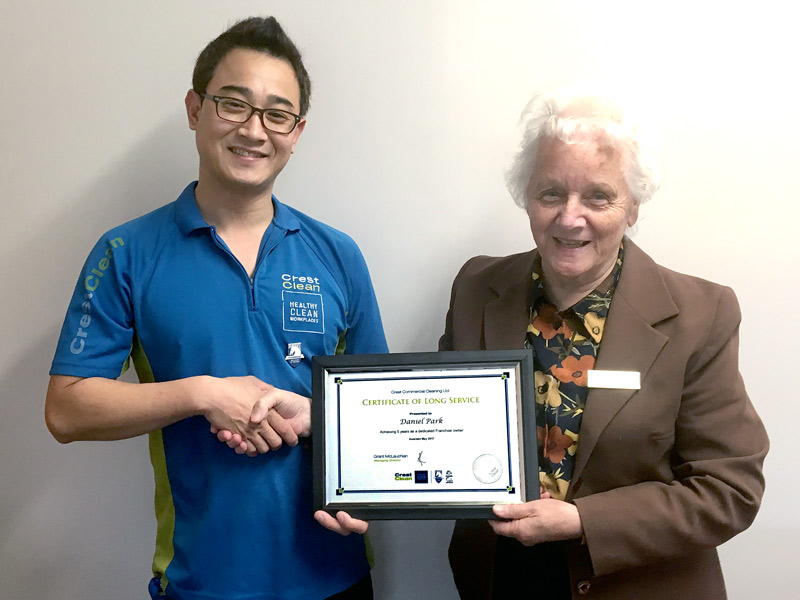 When a principal was asked if she would present a Certificate of Long Service to her school cleaner she didn’t have to think twice.

Carol Abley says nothing is too much for Daniel Park and he goes out of his way to make sure everything is kept to a high standard at Stanmore Bay School in Auckland.

Daniel has been the cleaner at Stanmore Bay since he started his CrestClean business five years ago.

“During this time he has supervised staff and worked as the sole cleaner of a very large primary school,” said Carol.

“Daniel is conscientious, hardworking and meticulous in his cleaning.”

But it was also Daniel’s timekeeping and commitment to his job that has particularly impressed the school’s head.

“He is reliable, never having a day’s absence during this time,” she added. “He is approachable and flexible. If we have events on at school for which a change of routine is required he is happy to oblige.

“Every night he ensures the school is alarmed before he leaves. This is a very important part of his job and we can depend on him to complete this task.”

“Daniel has always been one of our very best operators,” he said.

“He is always well presented, always has a smile on his face and goes well beyond the expectation of his clients.”

Daniel, 40, is originally from South Korea where he ran a restaurant specialising in Japanese cuisine. After arriving in New Zealand he remained in the food industry, settling in Kerikeri and he owned a Japanese restaurant there.

But he admits it was pretty tough. “It was hard work, seven days a week and not much free time,” he says.

Having his own cleaning company has been a game changer, he says, bringing a great work/life balance. “I work Monday to Friday, so at weekends I get to relax.”

That means plenty of time for fishing and getting out in his six-metre boat.

Daniel say he loves his job – and he has plenty of praise for his Regional Manager. “Neil has always given me some good opportunities.

“I’m very happy with CrestClean. I always try to do my best for the customer.”

He says good communication with his customers is key and he takes time to explain all the different systems and cleaning methods CrestClean uses.

“I tell them why we do what we do and how we use different colours of microfibre cloths for each task, I think they really appreciate that.”