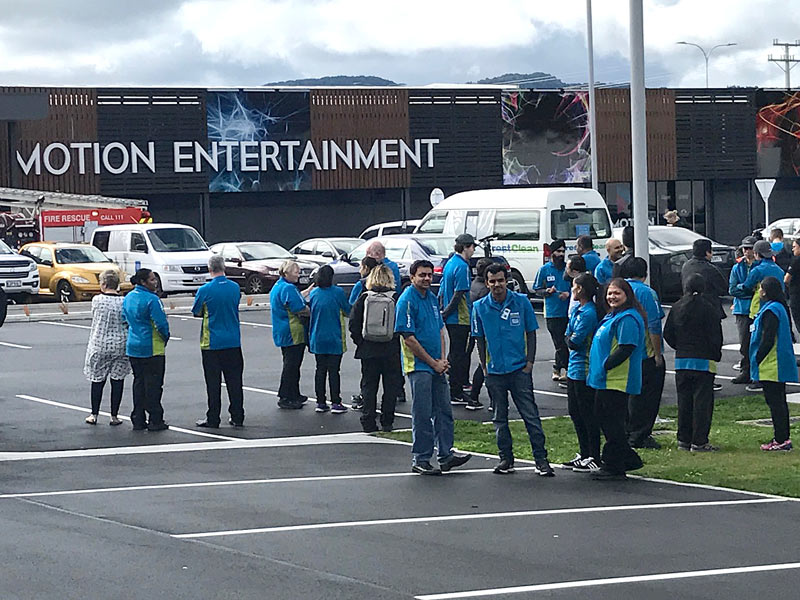 CrestClean’s Rotorua personnel outside Motion Entertainment after evacuating the building when the fire alarm went off.

Just after the company’s Managing Director Grant McLauchlan got to his feet to kick off the annual event, he was drowned out as the building’s fire alarm sounded.

Ironically minutes earlier, as part of the meeting’s health and safety requirements, CrestClean’s Rotorua Regional Manager Bill Douglas had explained to the gathering what to do in the event of an emergency.

Bill said his first thought on hearing the alarm was that it might be a practical joke played by Grant.

“I said to Grant ‘have you organised this?’. It seemed strange that just 10 minutes before the alarm went off he’d asked me to do a health and safety induction!

“Then I thought it must be a mistake but a few seconds later we heard an announcement to evacuate the building.”

But the reality of the situation sunk in when everyone evacuated the building and assembled in a nearby carpark as two fire engines arrived on the scene.

The emergency was traced to the kitchen area where smoke had triggered a fire sensor at Rotorua’s Motion Entertainment Centre.

“It just goes to show the importance of health and safety,” said Bill. “I really did think Grant had set it up.

“No one panicked, we all just filed out of the building down the back stairwell and we were escorted to the carpark. Thank goodness it wasn’t raining as we would all have got soaked!”