Health and safety a priority for caretaker 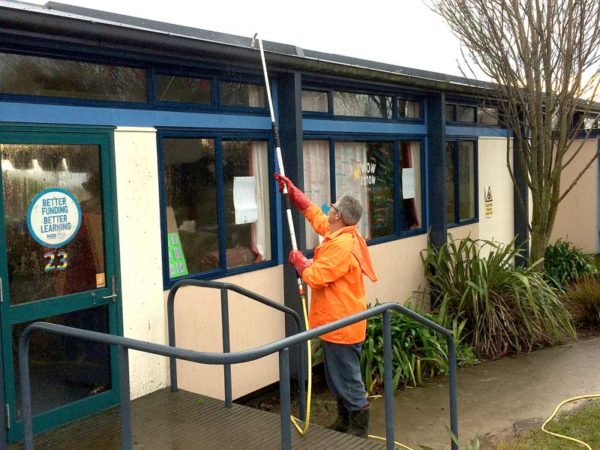 Using a high-pressure hose means caretaker Murray Kelly doesn’t need to use a ladder to tackle the job of cleaning out the guttering at Waimataitai School.

Safety-conscious school caretaker Murray Kelly is vigilant about keeping himself and others safe.

He’s always on the lookout for labour-saving devices that not only bring efficiencies to his role at Waimataitai School but cut down the likelihood of anyone getting hurt.

So much so that when it came time to get up the ladder and clean the spouting ready for the winter rain, Murray went searching for a better and safer way to complete this task.

In the end it was a chance find of an extendable pole that proved to be the ideal solution.

“I just happened to be walking through a hardware store and I thought that’s ideal for what we wanted and it’s extendable.

“I can get most of the dirt out of the guttering with this high pressure hose. I’m always looking for something that’s going to make things a little bit easier and safer.”

“Waimataitai School has a safety committee that Murray is a part of.

“Not only is Murray the caretaker, he also has the cleaning franchise at the school so he is the ideal person to notice anything that may be harmful.”

CrestClean came on his radar again when he moved to Timaru. “I thought I need to get myself some decent income coming in and I remembered that I’d been talking to CrestClean all those years ago and I thought I’d take another look at it.”

It’s a decision that’s worked out really well, he says. And he likes the fact that CrestClean takes care of the accounts and contracts and there’s no selling or worrying about chasing for payment.

“I don’t’ have to worry about selling and doing all the quoting. I like the way it’s all set up.

“Rob’s a good guy and he comes down makes sure we’re all doing well and he keeps in touch all the time. I like the training that they give you at CrestClean.”