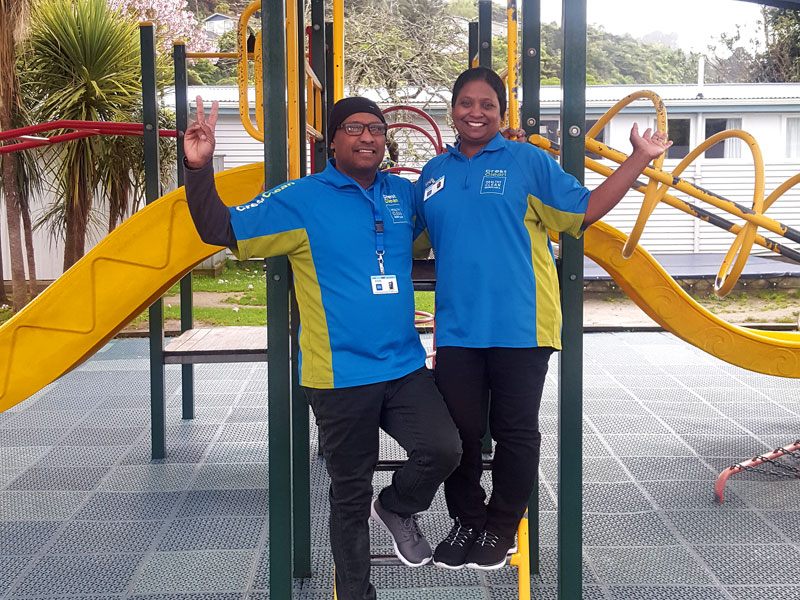 Anzila and Gyaneshwar Dass are one of CrestClean’s top performing teams in the Hutt Valley.

They have been operating for less than a year but this forward-thinking couple have revealed a succession plan to ensure their cleaning business is in good hands after they step down.

Not that Anzila and Gyaneshwar Dass have any thoughts hanging up their cleaning gear just yet.

For them business is booming and the new franchisees have doubled their turnover in the seven months they’ve been with CrestClean’s Hutt Valley team.

“I have only one son and I’ll be passing the business on to him eventually,” says Gyaneshwar, whose 21-year-old son is looking to pursue a mechanical engineering career.

“I want him to carry on with his career but I’m hoping that at a later stage he will join us and eventually look after the business,” added Gyaneshwar.

The couple’s work has generated a flurry of feedback from satisfied customers. They have also impressed CrestClean’s Wellington Quality Assurance Co-ordinator Philip Wilson.

“The quality of work they do is exactly the standard of cleaning that we pride ourselves on. They are very good operators and are always looking to better themselves,” Philip says.

“They enjoy talking with teachers at both schools they clean, and some kids even think Gyaneshwar is the plumber as he’s constantly cleaning the school bathrooms.”

Feedback about franchisees’ work can earn them a Certificates in Excellence Award. Anzila and Gyaneshwar collected the most awards in this past quarter.

So what’s the secret of their phenomenal success? Well according to Gyaneshwar it’s being totally focussed on the customer, doing a great job and being prepared to be flexible.

“Sometimes we have to go the extra mile if they want something that is out of our schedule of duties.

“But if you do something like this for them they are happy and they appreciate it. That’s really what it is and probably why we have good relationships with customers.”

Anzila and Gyaneshwar came to New Zealand from Fiji seven years ago. The move was triggered by a desire to give their children a better future. As well as a son, they have a daughter who is in Fiji working as a pathologist.

Before they bought a cleaning franchise, Gyaneshwar worked as a night manager at a Wellington hotel and Anzila was a housekeeper for a local holiday park.

It was while in the hotel industry that Gyaneshwar picked up some useful skills on working with people.

“At times it was pretty busy,” he recalls. But dealing with the public could be demanding at times, he added. “The most horrible part is that we used to have to handle intoxicated people.

“It was challenging but I got good experience from the hotel in people management.”

The idea to join CrestClean happened after Gyaneshwar began helping out a friend who had a cleaning business. “That built up my interest in getting a cleaning franchise for myself,” he said.

Anzila, 52, and Gyaneshwar, 51, say having their own business has been a life changer.

“I like being in charge of managing my own time,” he says. “And the most important thing is we work at our own pace. Deadlines are there but it’s not like what I used to have to do at the hotel.”
They say they enjoy working together. “When we came to New Zealand we were not able to see each other much and now we have heaps of time to spend together.

“It’s really fun and good to work together. We don’t have any bosses around us and there’s no pressure.”

Anzila has nothing but praise for the training they received through CrestClean’s in-house programmes delivered by the Master Cleaners Training Institute.

“At first we thought cleaning was just spraying and wiping but after our training we realised that there’s a lot of techniques to learn,” she says.