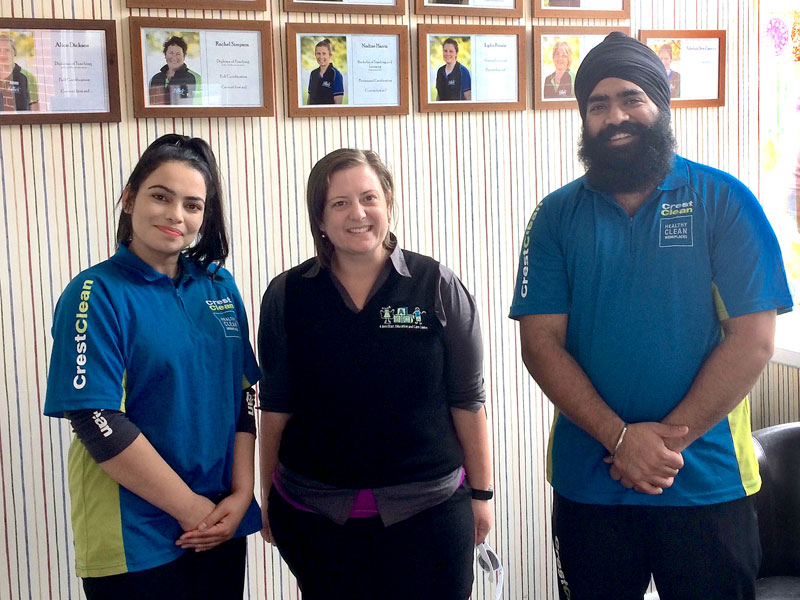 Knowing they’ve done a great job for their customers is reward in itself for CrestClean’s Armit Singh and Karamjit Kaur.

So learning they’d won the company’s quarterly prize for the most Certificates in Excellence Awards came as a mixture of shock and delight.

But news of the couple’s prestigious award will likely come as no surprise to any of their Timaru customers.

It’s Armit and Karamjit’s dedication, high standard of work and willingness to go the extra mile that has been impressing staff at ABC Marchwiel.

Centre Manager Tash Joyce neatly summed up how Armit and Karamjit are thought of at the early learning centre.

“I honestly couldn’t rave about them enough. We are really lucky to have them,” she said.

Robert Glenie, CrestClean’s South Canterbury Regional Manager, said the couple have worked hard on their business since joining the company earlier this year.

“Amrit and Karamjit have grown in ability and confidence and they have increased the size of their business in a very short time.

“All this is due to pride in their work and taking customers’ concerns on board.”

As well as doing a great job at ABC Marchwiel, it’s Amrit and Karamjit’s friendliness that was also noticeable, says Tash.

“They are just really genuine lovely people and they really want to do a good job,” she added.

“If there’s any issues they’ll give me a ring. They have good communication skills.”

Tash recalls one particular occasion when Amrit and Karamjit excelled. A carpeted area at the centre had become messy from children playing with a sensory material called “cloud dough”.

“It’s quite silky for the children to play with but also it crumbles quite a lot. And because it’s got conditioner in, it sticks quite a lot,” added Tash.

Concerned the clean-up job would be very time consuming, Tash left a note for Amrit and Karamjit, suggesting they leave the mess and she’d tackle it herself the next day.

But when Tash arrived for work the next morning, everything was spic and span and there was a note from Karamjit.

“They did an amazing job that night.” said Tash. “She’s written the loveliest note and all the carpets were all cleaned up and looking brand new again.”

Karamjit says they love working at ABC Marchwiel. “When you do a good job it feels great to have nice feedback. We really enjoy doing our very best for all our customers.”

Feedback about franchisees’ work can earn them a Certificates in Excellence Award. Amrit and Karamjit collected the most awards in CrestClean’s South Canterbury Region this past quarter.

As for how they would spend the prize money, Karamjit says they won’t be parting with the crisp $50 note any time soon. It will be framed alongside the congratulatory letter from CrestClean’s Managing Director Grant McLauchlan. 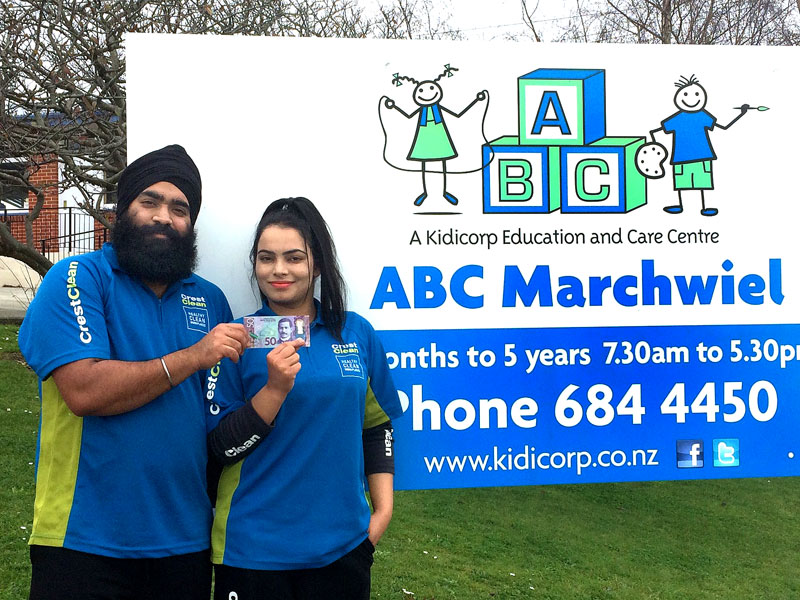 Armit Singh and Karamjit Kaur with the $50 they received for gaining the most Certificates in Excellence Awards.