From employee to proud business owner 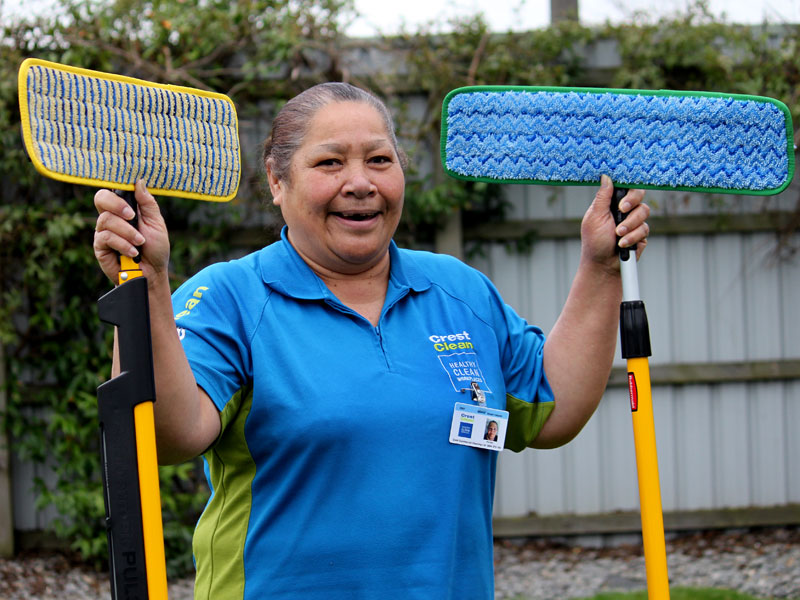 Sina Esau loves having her own cleaning business and says buying a CrestClean franchise has totally changed her life.

She is a familiar face at the law firm where her devotion to the cleaning has drawn countless compliments over the many years she has worked there.

But when Sina Esau turned up for work one day five months ago, no one in the Christchurch office could miss her amazing transformation.

Proudly wearing her new CrestClean uniform for the first time, her beaming smile said it all – and it was no wonder people were quick to comment.

Sina says it was a day she’ll never forget. “They said: ‘That’s a really nice top Sina’. And they said this was the new me.”

The 55-year-old never imagined she’d one day have her own cleaning business. But it was a sequence of events over the cleaning arrangements that presented her with the opportunity to be her own boss.

When the law firm relocated to another part of the city, managers reviewed the contract they had with the firm that had been cleaning their old office and decided to change to Crest.

As an employee of the cleaning company, it meant Sina’s job transferred to CrestClean when Crest won the contract.

And it was a meeting with CrestClean’s Christchurch North Regional Manager Yasa Panagoda that opened Sina’s eyes to the opportunity of being able to buy a cleaning franchise.

After talking it over with her husband, Taufale, Sina decided to go for it. “My husband said to me ‘I think it’s time for you to have a change’. He said ‘I think you can do it’.”

In her old job as an employee she had become disillusioned, sometimes not looking forward to work.

How things have changed for Sina. Now doing the same work, but as a business owner, the move has given her a new lease of life, she says.

“It’s was a little bit scary at first but now it’s a good feeling. It’s totally different from being an employee to being a business owner.

“Now I really look forward to getting up in the morning and going out there to run my business,” she says.

“She’s very bright and enthusiastic. She was just blooming from the time she arrived for her assessment.

“She really appreciated the training and realises that it makes her better at her job.”

Chris added: “She flew through her assessment with no mistakes at all, scoring 100 per cent.

“You can see she takes a real pride in her work. She now sees everything she does through new eyes having gained so much from the training.”

Yasa says Sina is not only happy in her work but is rapt with the security she has from running her own business, which has also increased her earnings potential.

“It was a big step up from her previous job when she was an employee.”

Sina says she’s earning a lot more compared with her previous job. As an employee the hours she worked could vary, meaning her take home pay could change from week to week.

And being a business owner has put a real spring in her step. She says she’s become more confident and a better cleaner for the training CrestClean has given her.

“I’ve had to really step up but it makes me happy. It’s the best job I’ve ever had.”

She’s already looking to expand the size of her business. “I feel really happy to go out there looking smart to do a professional job. I feel so proud of what I’ve achieved.”