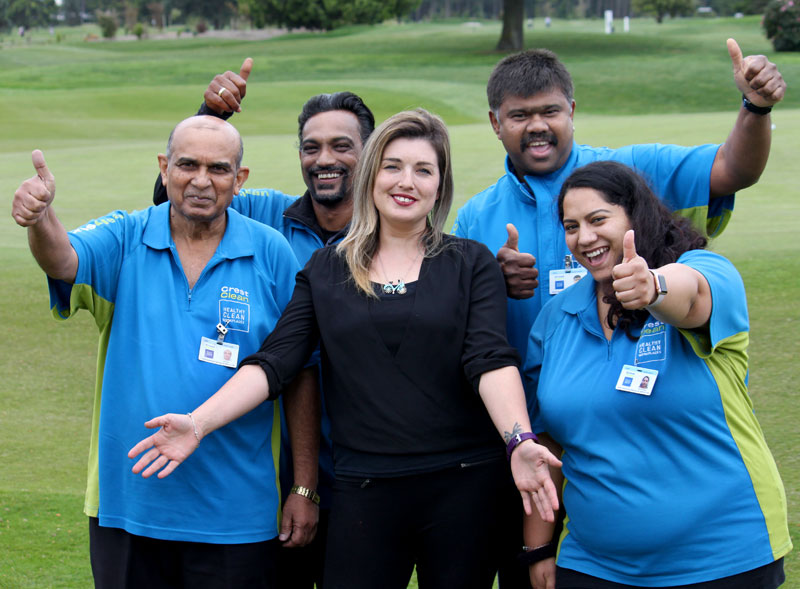 She’s long admired CrestClean from afar – but now Gina Holland is rapt to be part of the close-knit Christchurch team.

In her previous job as South Island Sales Manager for Waiwhetu Distributors, Gina got an insight into the CrestClean business model – and she liked what she saw.

So when the role of Christchurch South Regional Manager came up for grabs Gina didn’t hesitate.

“I’ve always admired the Crest business model,” she says. “In my last job I would always get feedback about the different cleaning companies.

“It gave me a real insight into the whole cleaning industry and Crest by far would get the best feedback from customers.
“Crest is very different from any other cleaning company in New Zealand. They have fantastic training and all their procedures are very streamlined.

“I knew I would be coming to a company that was well respected and does a fantastic job for their customers.”

The 32-year-old says Christchurch is an exciting city and the ongoing rebuild following the devastating earthquakes is creating many opportunities.

“There’s so much happening with new things popping up and places reopening. Christchurch is really coming alive again for the first time in years since the earthquakes.

“People are coming back to town and parts of the infrastructure are finally coming to completion.”

“We have a lot of growth in the Christchurch South area. There are new businesses and I’m looking at getting out there to meet people and explain what CrestClean can offer them.”

She loves the energy of working in a busy city and has hit the ground running in her new role with CrestClean. “I thrive on being busy. I can’t sit still and I need to be super busy.

“I read in a sports psychology book once that everyone has pressure in their lives but it’s up to you whether you turn it into stress or you thrive on it. I’m one of those people who tend to thrive on pressure.”

Gina, who has two young children, is a jazz fan and studied music at the University of Canterbury. Before joining CrestClean she worked in sales, at first in the communication sector, later joining Waiwhetu Distributors.

She’s delighted to be working with CrestClean’s Christchurch franchise teams and is a familiar face to many of the CrestClean business owners.

“I’ve met a lot of the franchisees and I dealt with them day-to-day in my last role. I know they’re good people and it’s going to be great to work with them.”

Gina values her people skills and says a key is being a good communicator and able to listen.

“I really value communications, and that goes both ways. Communication with franchisees, with customers and the way we communicate is very important.”

And there’s no doubt of her commitment to her customers. “If I promise to do something and commit to it I strongly believe in following through,” she says.