In their late 70s and still enjoying work 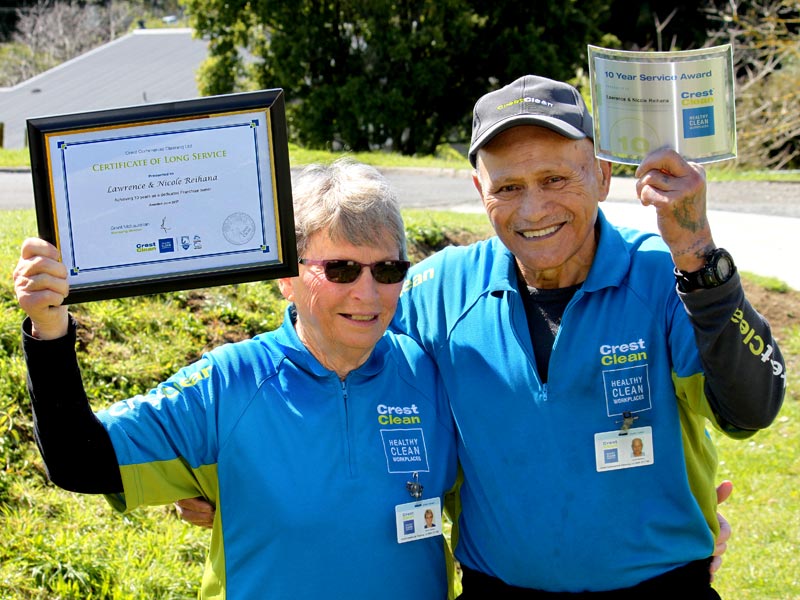 Nicole and Lawrence Reihana have been with CrestClean for 10 years.

He might be three years shy of his 80th birthday but Lawrence Reihana won’t entertain any talk of retirement.

Even his son, former All Black legend Bruce Reihana can’t persuade his dad to think about giving up his CrestClean cleaning business.

Lawrence and his wife Nicole are CrestClean’s oldest franchisees and have just celebrated reaching their 10-year milestone with the company.

Nicole, who turns 80 later this year, is not too hands on with the cleaning these days. She oversees the admin side of their business, although still lends a hand if one of their workers is off.

The couple had been involved with farming for much of their working lives. It was while running a farm they decided to look at buying a CrestClean franchise. It meant their cleaning business could also provide employment for the workers they had on the farm.

“We invested in a franchise and it’s been a really good experience. It’s enabled others to have a job as well,” she said.

“We have enjoyed doing the cleaning as it’s physical as well,” she added. “It’s different from farm work but it enables you to stay supple and fit.”

At a time of life when most people of his age are long retired, Lawrence still enjoys getting up early to go out cleaning for their customers, which include schools and local businesses.

He says his strong work ethic came from his father and the rural upbringing he had on a Northland farm.

“My father was a hard worker. We used to work from 4.30 in the morning in summer and not finish until 10 at night.

“I was milking cows from the age of five. We got the cows in at 2.30 in the morning for milking to catch the cream truck at 8.30am.”

He says he’s always been strong and his fitness and agility has won the respect of the workers they employ to help run their business.
“I still do all the heavy work and I outdo the young ones! They call me the young fella now.

“I do the burnishing and the buffing and the windows, the mopping. I’ve always been strong. Work keeps you motivated.”

Hard work and helping others is in his blood. Lawrence has been a Maori Warden, a volunteer ambulance driver and helped out in the fire service.

And he still rolls up his sleeves if anyone in the rural Waikato community where they live needs a helping hand. “I always go out and help other people. Anything they need doing around their place maybe some gardening. Just people I see who are struggling or I hear about.”

Lawrence reckons a lot of people retire too soon – the shock of giving up work is not good for the body, he says. “Some don’t live too long after they stop work. They keel over in no time.

“I’ve had a lot of Maori Wardens who worked for me and they were younger and they are now all gone.”

The couple have enjoyed following the fortunes of their son, former All Black Bruce Reihana, who began playing in the National Provincial Championship level with Waikato in 1996 and led them to two Ranfurly Shield victories.

Lawrence says others beside his son have urged him to retire – but to no avail. “My doctor says it’s a waste of time telling me to slow down,” he joked.

“It’s amazing he’s still doing cleaning at that age and that he’s doing it right. He doesn’t take any shortcuts and takes a real pride in his work.

“It just shows age shouldn’t be a barrier. As long as you’re healthy and fit and have the right attitude you can carry on.”