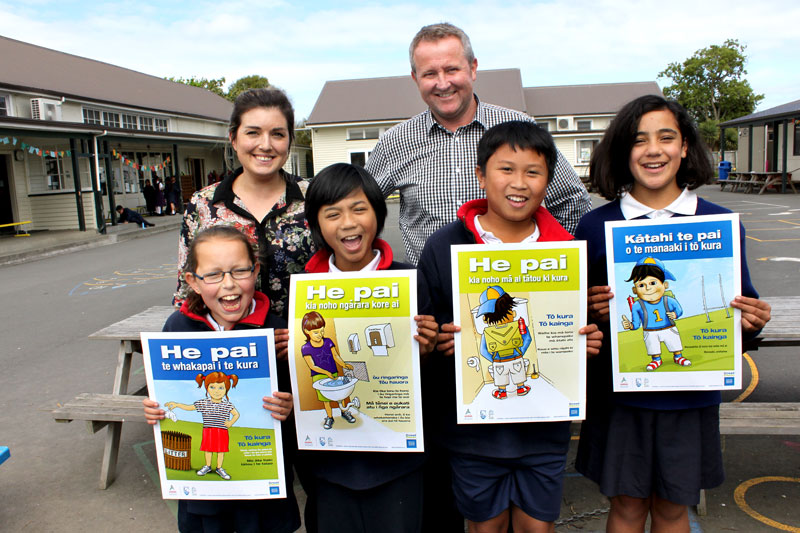 Addington’s Sacred Heart School pupils are among the first Christchurch kids to get their hands on innovative posters that use humour to promote Te Reo Maori.

Depicting cartoon characters, the four unique designs immediately struck a chord with principal Frank McManus who was in no doubt they would be a big hit at the school.

Good resources in the Maori language were scarce, he said, and the posters would also double up as a teaching aid as part of the school’s Te Reo programme.

“Health and hygiene is huge. We don’t always have the right messages up around the school.

“These bold posters are fantastic for that. If one child is doing it right then they are likely to pass it on to others and that’s great.”

The posters, also available in English, have proved extremely popular with the country’s school principals. So great has been the demand that the Maori poster sets have been reprinted several times since their launch.

Sets of the posters are available free to all schools. The poster initiative has been hailed by Hoana Pearson, president of the Te Akatea New Zealand Maori Principals’ Association.

“For years, many of us in Maori education have been hand drawing and photocopying our resources,” he said. “To see things that are beautiful and produced in colour for our kids and our communities really validates the beauty of Te Reo and of them.”

Mr McManus said his school had a high number of youngsters whose families were new migrants. Filipino children made up more than 50 per cent of the school role, he added.

“They respect the new culture and they want to learn it and assimilate with our community.

“They make a huge effort to work at it. Our Filipino children’s pronunciation of Te Reo is excellent. The posters will be a great help,” he added.

“We’ve worked really hard over past three years on our Te Reo programme.”

And there had been a renewed initiative with the teaching of Te Reo Maori at his school, he said.

“Previously it was a bit hit and miss and it was taught through our religious education programme. But we’ve been part of a Maori achievement collaborative over three or four years and we are teaching it in every classroom and it’s getting used daily.”

“These posters get a great reception from the kids and teachers alike because they are fun but also carry a strong message that people can easily relate to.”