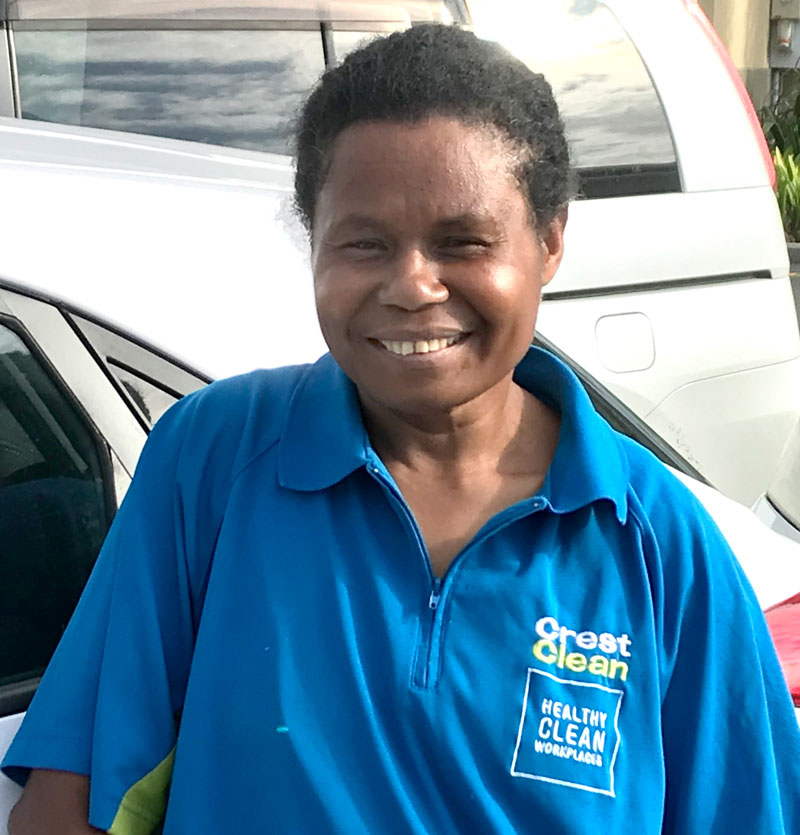 Tish Geaumb began cleaning to subsidise her living expenses when she was a student.

Her approach to the job and going the extra mile have won her many plaudits from happy customers.

And in her manager’s eyes, she’s queen of the kindies after great feedback he’s received about the standard of her work.

Jim McManus, CrestClean’s Whangarei Regional Manager, says Tish Geaumb is a rising star and does a fantastic job at the kindergartens and early childhood centres she looks after in Kerikeri.

“People like her approach and she’s very dependable and fits in well,” he says.

“She’s great with communications and liaising with her customers. Her commitment to the job is outstanding.”

It was by chance that Tish got into commercial cleaning while she was a student at Waikato University. She’d arrived from Papua New Guinea to attend a business studies course in Hamilton.

She got a cleaning job to help with her living expenses. “It was easy work and I didn’t have to think hard,” she says. She eventually became a supervisor with the company, which led to a permanent role.

Tish eventually moved to Kerikeri, where she has a fulltime job at Turners and Growers leading a team in the irrigation department.

But after a spell in a part-time role with another cleaning company, she had a hankering to work for herself. “I had the knowledge and skills needed to start my own cleaning business,” she says.

“Crest came along and that changed my plans. Buying a franchise made it easier because they take care of everything.”

Although she had a good understanding of the cleaning industry, upskilling courses she went on through the Master Cleaners Training Institute were invaluable, she says.

“The training I received was awesome. Although I had basic knowledge of cleaning the Crest training took my knowledge to a totally different level.”

Trish works in the evenings and is hoping to eventually expand her business to a full time position.

“I love doing what I’m doing and really like the work. I like going the extra mile for the customer and to know that I’ve done the best job I can,” she says.

“It’s nice to get feedback and to hear the customer is happy. Cleaning is now a career for me. It can be a lot of hard work but the money is good.”