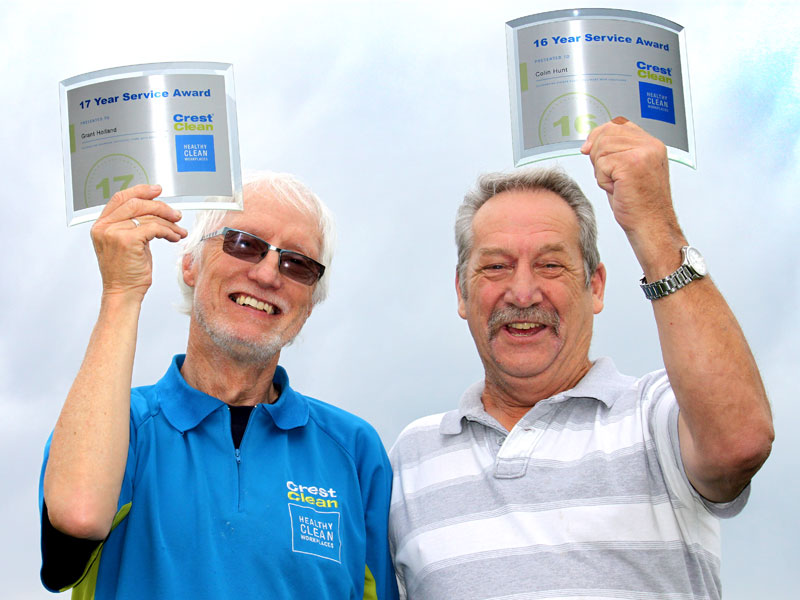 Grant Holland and Colin Hunt with their Long Service Awards they received at CrestClean’s annual Team Meeting in Christchurch.

It’s no wonder they are looking proud as they celebrate a combined total of 33 years of running their own successful businesses.

Grant Holland and Colin Hunt are two of CrestClean’s longest serving franchise owners and their commitment to the company was celebrated during the annual Team Meeting in Christchurch.

It was 17 years ago when Grant Holland turned his back on retail and bought a CrestClean franchise. At the time he’d been working as a salesperson at Hallensteins but wanted a job that could offer more flexible hours.

“I’ve always liked the idea of being self-employed and being your own boss. You can be independent and make your own decisions,” he says.

“The good thing about a franchise is that it gives you the security as well, and you’ve got a whole team behind you.”

Grant says a lot has changed since he joined CrestClean. “There were only four franchisees in Christchurch when I started. Now there’s more than 50, so it’s really grown over the years.”

Although there’s a lot more competition these days, Grant says commercial cleaning is still a great career choice for people who want to work for themselves.

“CrestClean offers a good opportunity for people who want to come to Christchurch. It’s not as though you have to wait to find a job, they are looking for people all the time as the company is growing so fast.

“With the building boom in the city at the moment there are lots of new buildings going up, and of course they all need people to clean them.”

Grant said one of the many highlights in his career with Crest has been building relationships with his customers. It was through a personal recommendation of a school principal that led to more work.

“We bought one school contract and they were really impressed with us and he talked to other principals and we ended up with two more schools through him. That’s certainly been a highlight.”

After 16 years with CrestClean, Colin Hunt has finally called it a day and has recently retired. Colin, 66, and his wife Pauleen had started their CrestClean business when they returned from Australia.

In the early days Colin soon found plenty of work and his business quickly took off as people looked for a reliable and professional commercial cleaning service. “Personal recommendation was a big thing,” says Colin.

“They knew you and the quality of your work and that really helped us. We built up quite a big business and we worked hard and made good money.

“We achieved a lot by having our own business. We have our own freehold home and we’ve done really well over the years.”

After the Christchurch earthquakes his wife returned to nursing, her profession before they had a cleaning business.

Colin says a lot has changed in the cleaning industry but reputation and doing a great job is still important now as when he started out.

“I’d say to newcomers just make sure you pace yourself, don’t rush the work and keep up the standards and look after your customers.”

The couple are planning a sunshine getaway when Pauline finishes her job. “We’ll probably have a cruise sometime around the pacific islands as a bit of retirement present for both of us.”

He thanked Colin and Pauline for their commitment to Crest. “They have had many really loyal customers who’ve appreciated their work over the years.”