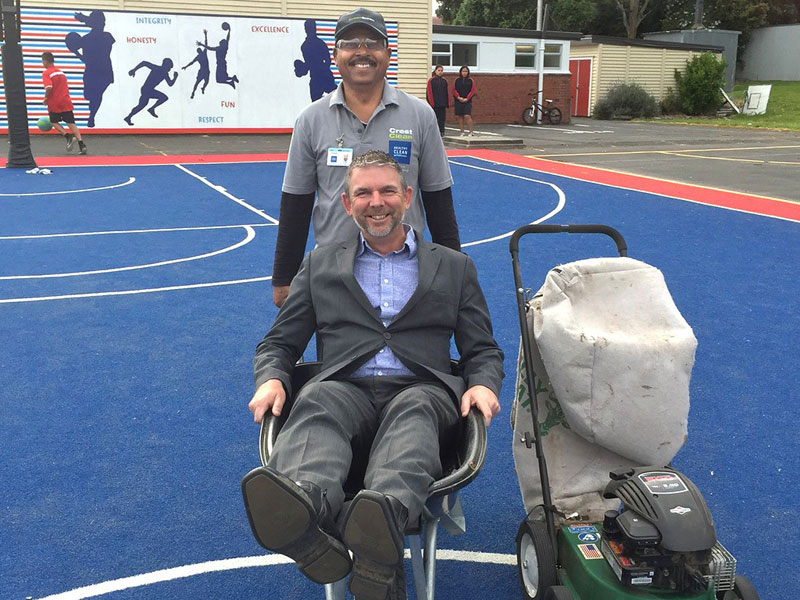 Auckland’s Glen Taylor School has a new caretaker and Principal Chris Herlihy couldn’t be happier with the decision they made to go with Crest PropertyCare.

From the moment Hari Krishna took over caretaking duties the effect was crystal clear to everyone, says Chris.

“When Hari came on board the community started to notice from day one the difference it made around the school – just having somebody who was energetic and motivated to make a difference.”

Chris added: “He’s a good man and we’re very lucky to have him.”

In schools throughout the country, caretaking has become a hot issue for principals over what to do when the caretaker retires. Crest PropertyCare provides schools with a viable alternative to directly employing a caretaker.

The traditional caretaker has become an anachronism – and many existing caretakers are operating outside of the current workplace Health and Safety compliances. All too often hazardous tasks are being performed by people without the correct equipment or risk controls.

Crest supplies a trained and capable person who is introduced to the school and inducted to the tasks identified in the schedule of duties.

“Within a week they came to look at what our needs were,” said Chris. “Dries brought Hari in and we had a chat.”

Chris said he’d been impressed with the effort Dries made prior to any agreement being signed with Crest for the caretaking position. The caretaker’s shed got an immediate revamp, he added.

“The thing that really got me off to a good start with Crest was the fact they had probably upwards of six people at any one time during the two weeks of the holiday going through the caretaker’s shed and tidying it all up, relabelling everything.

“We probably filled up a couple of skips at least. On the first day of term everything was spick and span.

“I appreciated that it was all done on good faith. There was no signing of paperwork and contracts at the time. I said to Dries: ‘You know I can pull out of this at any time. I haven’t signed anything. I could just get you to clean my caretaker’s shed and get rid of you!”

After taking on the caretaking at Glen Taylor School, Hari’s work ethic and willingness to help quickly made a big impression with staff.

“Probably from the teachers point of view was that he was so willing to get into a classroom and make small adjustments and fix things, which we’d struggled with prior to that,” said Chris.

“The teachers were like ‘ah, sweet, we’ve finally got somebody that we can say hey, could you come and bang a shelf up or can you fix a desk or a chair?”

But as well as being a handyman, it was also Hari’s attitude to be part of school life that was noteworthy, says Chris.

“One of the difficult things for a contractor is being able to fit into the school. Hari came in and was part of the staff straight away.

“Hari is Fijian/Indian and he took part in the Fijian group at our cultural festival. He was up on stage with the kids and teaching them dances.

“It’s the extra stuff that’s really important for a caretaker. You’re not just seen as being the guy who goes around and does odd jobs, you actually get involved with the kids at different levels.”

Chris said it made sense to have the caretaking duties farmed out. A contract arrangement had many benefits.

“From a financial side, a lot of caretakers are 52-week employees so they accrue all this holiday pay.

“A lot of them use it for retirement savings. When they retire you’re stuck with this massive bill because you haven’t realised they weren’t actually taking holidays.”

CrestClean has also taken over the school’s cleaning duties. The role is also carried out by Hari with some help from his wife Baruna.

The standard of cleaning has also impressed school staff. “It’s nice not to have to worry about what the school is going to look like on a day to day basis,” added Chris.

Julie Griffin, Crest’s Auckland Quality Assurance Co-ordinator, says Hari does a great job with the cleaning. “He just does what it takes to get the job done.

“Hari and Baruna do lovely job of the cleaning. I’ve done couple of audits and everything is just perfect.”