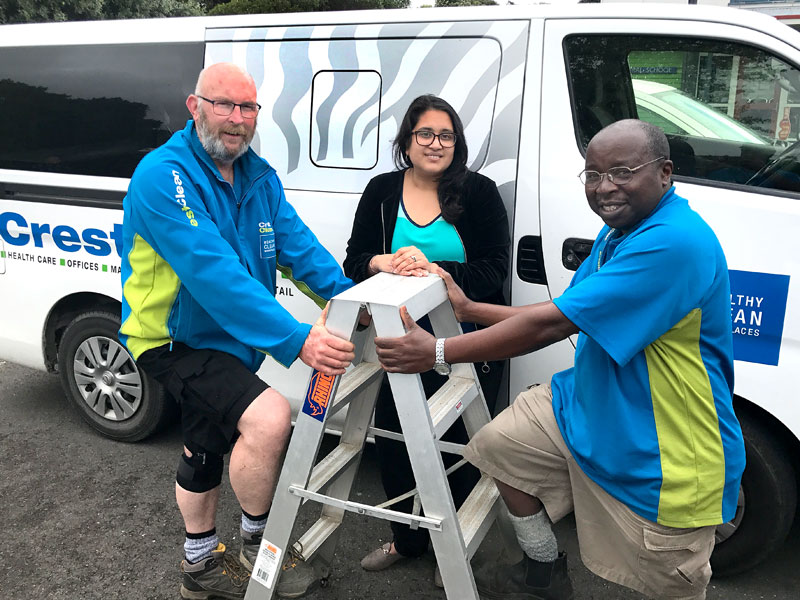 A health and safety expert says schools are risking heavy fines if their caretaker falls off a ladder and has not got adequate safe systems of work in place for working at heights.

Chris Chapman believes a number of caretakers have never had any specific training for their role and are failing to comply with the Health and Safety at Work Act, despite the new legislation’s implementation last year.

ACC figures for the education sector reveal that almost one serious accident a month involving a ladder occurred in 2016.

“You’ve got caretakers who’ve been at schools for years and a lot of them are retired builders or handymen,” says Chris, National Health and Safety Manager for commercial cleaning company CrestClean.

“They do a reasonable job but I very much doubt if many of them have gone through any formal training or are adequately assessing and addressing the risks,” added Chris.

His comments follow a ground-breaking course for Crest PropertyCare caretakers. The franchise owners, who provide contract caretaking services to schools and businesses, were assessed to ensure they are competent to work at heights.
ACC figures obtained for 2016 show ladder-related injuries are costing Kiwis more than $22 million a year in claim costs. There were 12,636 claims and 50 to 64 year olds took the most tumbles.

“If a caretaker who doesn’t have a safe system of work falls off a ladder it all comes back on the school and the board of trustees,” added Chris.

“In serious cases a principal could be fined or even jailed for allowing a breach of health and safety to take place on their premises.”

He said some principals and school trustees might not be fully conversant with how the Health and Safety at Work Act 2015 impacts their caretaking arrangements. “A lot of them just aren’t aware, or if they are aware maybe they just haven’t realised the potential dangers.

“Caretakers do a lot of work that involves climbing up ladders. It might be changing lightbulbs or replacing batteries in clocks or doing work on the school’s exterior.”

Chris says school caretakers should not be working at heights unless they’ve had proper training and are competent for the specific task. “With some tasks they are essentially flying by the seat of their pants until something goes wrong. Untrained caretakers are an accident waiting to happen.”

CrestClean has a strict working at heights policy for its personnel. Anyone needing to use a ladder must apply for a permit.

The company recently held its first working at heights training and competency assessment event. It was attended by Crest PropertyCare personnel, who provide caretaking services to schools.

Caretakers can only be issued with site-specific permits to work at heights after health and safety training and competency assessment has been successfully completed.

Chris, who deals with all permit applications, said: “If I’m satisfied that we’re following all the guidelines, and we’re making sure our guys are as safe as possible, and that the risk factor is low, then I will issue a permit for a set amount of time.”

Zainab says the event demonstrated the company’s commitment to have caretakers who are fully compliant with health and safety legislation.

“It’s really important that all our staff are trained, competent and confident at all times. Their health and safety and that of their customers is paramount.

“This newly established process for Crest Clean is another example of our industry leadership.”

In April an Auckland school was ordered to pay reparation of $40,000 after an employee fell off a ladder while carrying out work on a tree.

A prosecution was taken by WorkSafe for a breach of the Health and Safety in Employment Act 1992. A summary of the facts stated: “An employee was removing a dead tree at the school grounds.

“The employee was standing on a ladder removing a branch that was wrapped in vine. The branch came off and hit the ladder knocking the employee to the ground. The employee suffered a spinal cord injury.”

The defendant in the case was the school’s board of trustees. A guilty plea was entered at the Manukau District Court.

WorkSafe said lessons had been learned from the incident, which happened in March, 2016. “Ensure that employees do not undertake tree work for which they do not have the qualifications, expertise or competence to undertake.

“Where an employee does not have the requisite competence to undertake the task of tree work ensure that a competent contractor is engaged to undertake that work.”