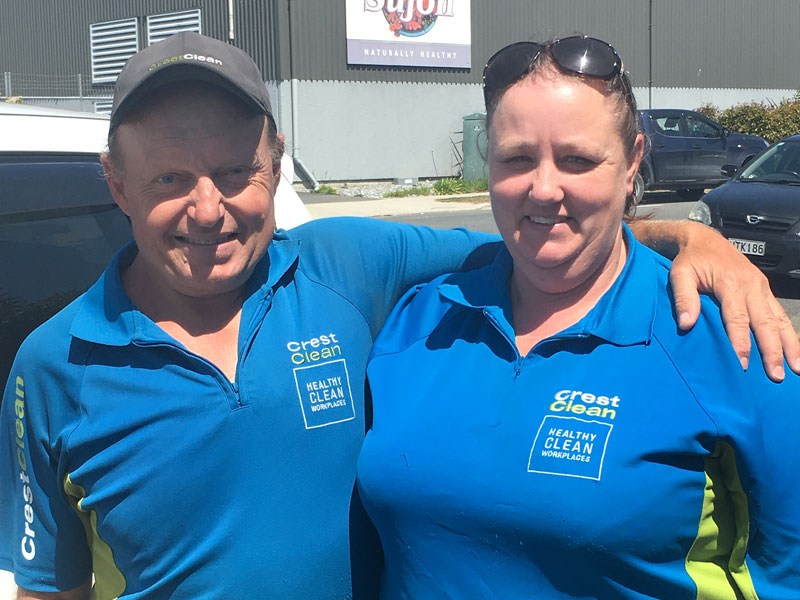 Charlie and Vicki Stratford have plenty of time to spend at their lifestyle block.

Charlie and Vicki Stratford are living the dream after compressing their full time job into just two and half days a week.

The Nelson CrestClean business owners have given over their Friday evenings and Saturdays and Sundays to work. But the trade-off is they can relax the rest of the time and enjoy four straight days off each week.

For Charlie, who had a job in retail before joining CrestClean, the benefits of having most of the working week free is still a novelty.

“Sometimes I have to pinch myself and say ‘jeepers, I don’t have to go back to work until Friday’,” he says. “I’m absolutely loving that aspect.”

CrestClean’s Nelson Regional Manager Barbara de Vries is the “dream maker” who fixed it for Charlie and Vicki, rejigging their roster so they can have a working week that fits their lifestyle.

The arrangement also provides CrestClean’s customers, whose sites need cleaning at weekends, with a reliable and professional service, she says.

“It’s a win-win all round. We like to accommodate people’s wishes where we can. Charlie and Vicki do two long days and a half a night that condenses their work.

“I’m really pleased they are happy with the arrangement. They are loving the new freedom it’s giving them.”

Barbara says Nelson is booming and there’s plenty of opportunities for people to join CrestClean and buy a cleaning franchise.

“We’ll be taking on the cleaning work at four new schools in Nelson next year, so there are lots of opportunities here.”

Nelson enjoys a great climate and a lifestyle that’s the envy of many other areas, says Barbara.

There were some distinct benefits of living in rural New Zealand, she added. “Nelson is about 10 years behind the north island, which is a good thing!
“We’re just getting to the stage where people toot at you if you’re too slow on the road. They’ve been doing this for years in the north island. It’s much more laid back here.

“Peak hour traffic in Nelson lasts half an hour, and you can avoid it really easily if you are organised.”

Nelson is a popular destination, with food, arts and crafts and music featuring prominently, added Barbara. “There’s certainly a lot going on. From October to March there is a festival every weekend here in Nelson.

“It’s a popular place to live for families. With great weather and good beaches, we have it all here in Nelson.”

Charlie, 51, and Vicki, 43, spend much of their free time at their 10-acre lifestyle block in the Marlborough Sounds. The couple bought their cleaning business while Charlie was still working at a local hunting and fishing shop in Nelson.

“After about 6 months of us originally joining CrestClean, I pretty much jumped on board full time,” he says.

“I like the variety of work and it’s completely different from retail where you are stuck in one location and you’ve got people bombarding you all day, every day.”

Charlie, who had eight staff members working under him, said the change from shop work was a breath of fresh air.

“With the cleaning it’s just us two doing our work without any interruptions. It’s a lot less stressful than retail.”