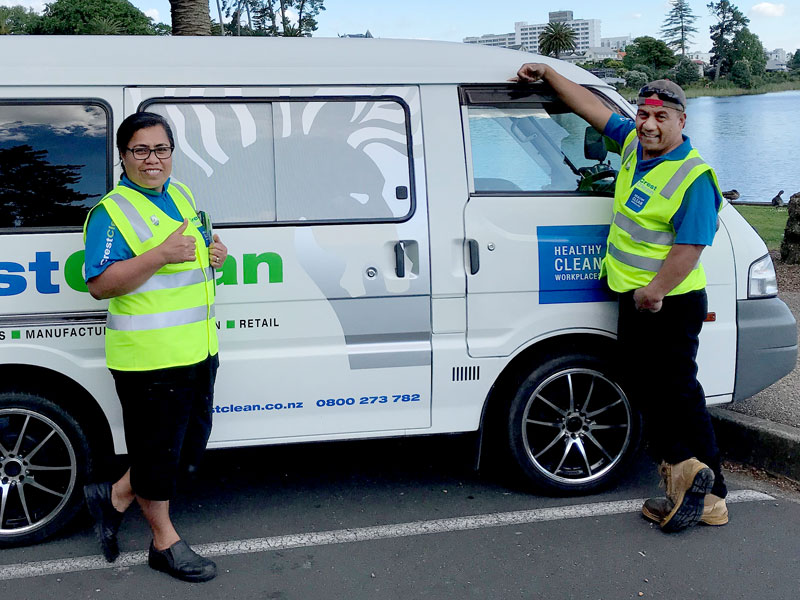 You could say cleaning is truly in his blood.

Just 6 years old and living in a remote island republic in the Central Pacific, Toroman Mwemwenteata was expected to do his share of household chores.

“When I was a young boy back in Keribas I used to do the cleaning around the house,” he says.

“My mum would wake me up about 5.30am and then I’d go for a swim in the sea with my dad. After the bathing I’d do the cleaning around the house. I had a routine of doing the cleaning.”

Toroman recalled his childhood memories as he and his wife Mitala celebrated 10 successful years running their CrestClean business.

Moving to New Zealand in 2001 had been a new start for the couple – but life in Wellington where they initially settled was not easy, he recalled.

Toroman landed a job as a kitchen hand at a busy restaurant in the capital city. However, long hours and low wages meant the family had just $40 left after covering life’s basic necessities.

It was challenging for his wife to balance the budget and provide meals for her family on so little, he says. A tin of fish could be stretched out over two days with rice and vegetables.

Toroman said he often worked seven days a week. “It was tough work starting about 6am and we’d often not finish until midnight.”

The turning point for the family came when a friend who had a CrestClean franchise in Hamilton offered Toroman a job. The pay was double the amount he was earning at the restaurant and he jumped at the opportunity.

“I began to pick up the Crest system of doing things and I wanted to have the opportunity of being my own boss,” he says. “I am proud to have my own business and it’s given me time for my family.

He says buying a CrestClean franchise was life changing his family. He says he’s put in a lot of effort to improve his English, knowing it was essential if he was going to be successful in business.

“I’m a very determined person and I worked really hard. The training from CrestClean was really helpful for me as it gave me the skills and knowledge to do my job well.”

Nivitesh Kumar, CrestClean’s Waikato Regional Manager, said Toroman and Mitala are excellent franchisees. “They are my only Kiribati team and they do a great job.

“They have a great attitude and work very well as a team. They are a very humble couple.”

He says their Hard Floor Care work is of a very high standard. “They are very experienced and it gives me the peace of mind that if they take on a job, they’ll do it well.

“Customers love them and they have some big contracts. The feedback about their workmanship is good.”

Toroman and Mitala’s 10-year award takes pride of place at their home. It’s a reminder to their five children of their parents’ success.

“We’ve placed it on the table, it’s there for them to see and that’s a good thing and we are very proud of it,” said Toroman.