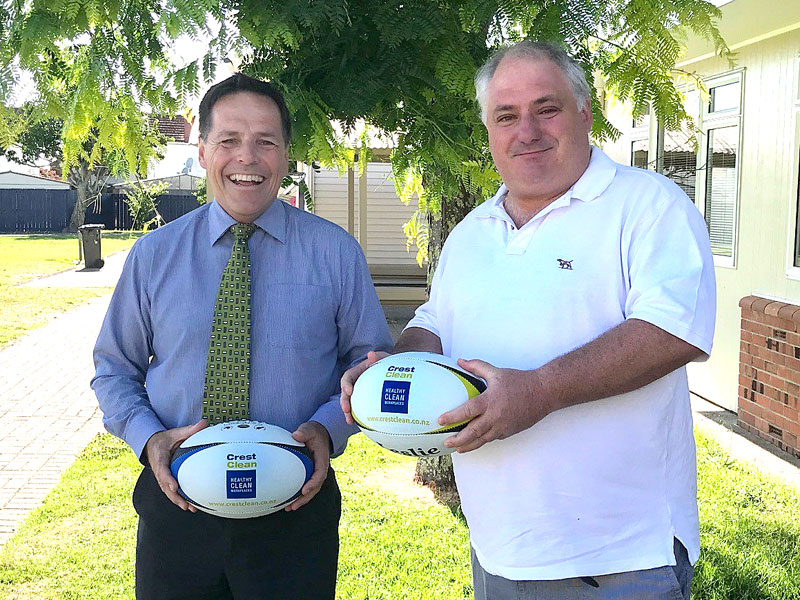 It didn’t take long for children at an Auckland school to get their hands on rugby balls won by their principal.

Richard Johnston was one of the six lucky winners in a promotion to celebrate the success of Crest PropertyCare – CrestClean’s new caretaking service for schools.

He revealed his win to pupils at Panmure Bridge School during morning assembly. “I threw all six ball out at assembly and we took a photo of the whole school with them,” said the delighted principal.

“It was fun as our assemblies are fairly formal and this was a very much relaxed and fun one.”

Richard says the balls will make a big difference. “All schools are strapped for cash so this is a real help to us.”

Rugby is popular at the busy primary school. “We play a lot of touch and we enter in the inter-schools rugby competitions in the area.”

“We are really happy with our cleaners. They are easy to talk to and easy to work with.”

He says the cleaning team fits in well with school life. “They are very well trained and have got good systems in place and they have a genuine interest in the school.”

Having the cleaning taken care of by CrestClean meant the school didn’t need to employ cleaners and get involved in managing staff and materials, he said.

“We have noticed since we have gone to commercial cleaning that we now don’t have all that hidden cost. It takes a lot of burden off me. I wish we’d gone down that track earlier.”

Panmure Bridge School pupils get a touch of the six rugby balls won for their school by Principal Richard Johnston.